A modest dose of history with wine and empanada

Posting about our departure from Valparaiso, Chile (see Valparaiso Departure III “The Sunset”) brings us to the time spent wandering this World Heritage Site, added to the UNESCO list in 2003.  Within the amphitheater of hills is Cerro Conception (Conception Hill), historically settled by English and German immigrants.  The façade of the Hotel Brighton, a building from the 19th century heyday of Valparaiso when it was a stopping point for shipping through the Straits of Magellan, reveals why so many of the buildings are alike: all are constructed from materials dropped off from sailing ships.

The theme of the Hotel Brighton evokes thoughts of immigrants remembering their origins, emigres claiming a spot of real estate to mold a sense of place for themselves.  This goes both ways, Valparaiso, Indiana was formerly Porterville of Porter County.  The motive force behind the renaming were the memories of the retired Captain David Porter, the sole survivor of an attack on his ship USS Essex by the British frigates Phoebe and Cherub in the War of 1812, within sight of Valparaiso. Fifty eight (58) United States Marines lost their lives in that sea battle.  To point out the obvious, Captain Porter is the namesake of Porter County.

Pam corrects me when I say we “stopped for lunch” at the Hotel Brighton, pointing out we “only” had a glass of red wine and an empanada.  Both were tasty, even more so with this marvelous view looking north into the other hills of the city.  The yellow umbrella is on the hotel restaurant terrace. 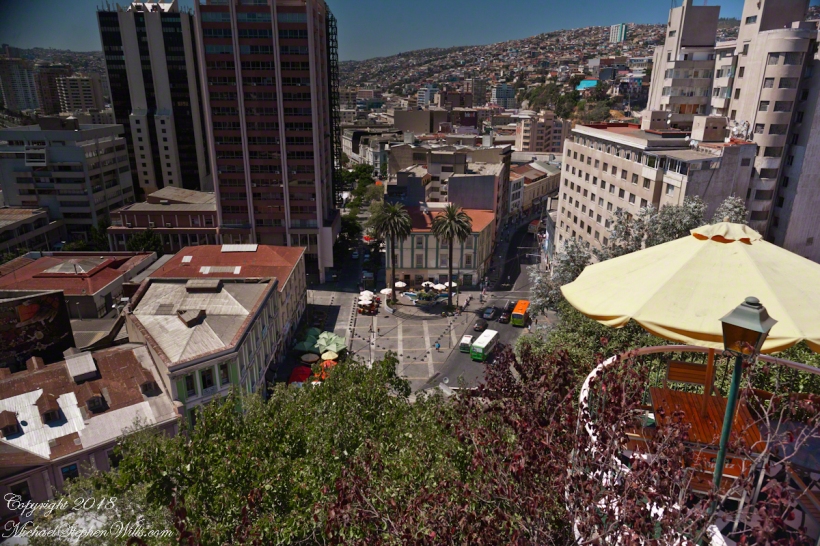 I missed capturing the signature wrought iron gate forming the word “Brighton” among decorative scrolls.  Built on the edge of Conception Hill it overlooks the coastal plain almost all of which is man-made.

During our refreshment, this young lady (see photograph below) introduced herself as a reporter for El Mercurio.  Accompanied by a photographer, she interviewed us and we had our photograph taken, I returned the favor with the following photograph saying the story might appear in the next edition.  Standing next to her, with a puzzled look, is our waitress who was from the States.

El Mercurio de Valparaiso is the oldest continuously published Spanish language newspaper in the world.  In my research for these photographs I discovered the newpaper officers were a short walk from the landing of the Ascensor Conception.

14 thoughts on “Our Fifteen Minutes of Fame on Conception Hill”