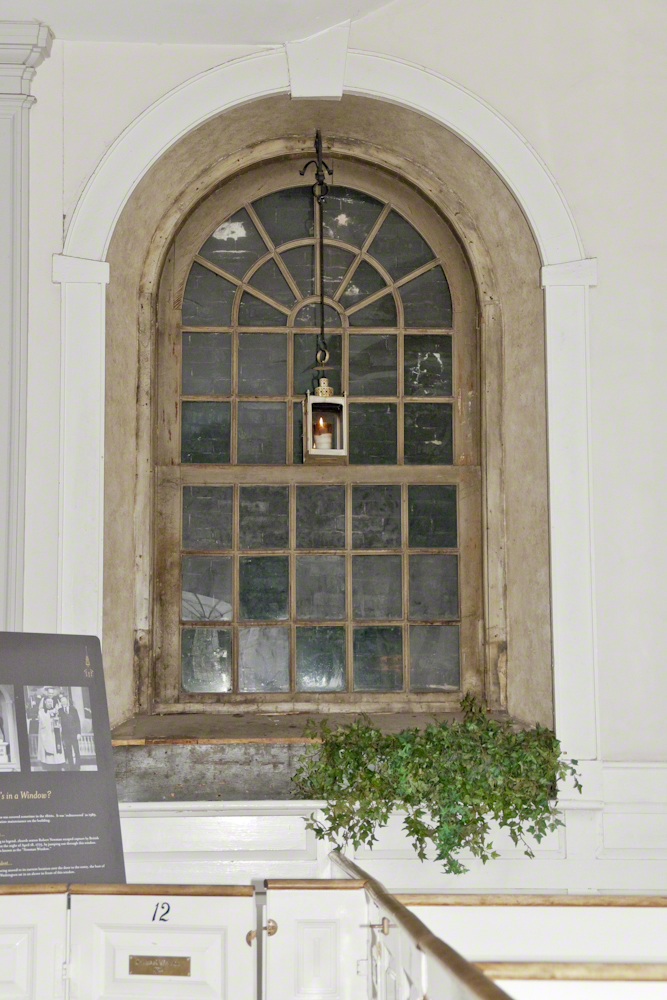 A luminous white pulpit rising from an elegant beam, as of light, graces Old North Church altar. In 1775, the Tory church minister preached from this pulpit in support of the English King. The floor space is filled not with pews; but boxes, each was the property of the occupants to furnish and decorate to taste. Today, each box has a brass plate naming the former owners.

As with sports stadium box seats today, these boxes provided the owners access to church services. Just before the pulpit is he box awarded to wealthy merchants for essential contributions to Christ Church, the formal name of the church and congregation. Today, there is a more direct sports connection: lanterns were lit in the tower for the Boston Red Socks 2004 World Series win.

A bit after 10 pm on April 17, 1775 two men entered the church from the front door, pictured here under the arch. The church sexton Robert John Newman and Captain John Pulling carried two simple lanterns of glass and iron coated with tin. A third man, Thomas Bernard, stood watch because Boston was occupied by British “Regular” troops who patrolled the streets.

The lanterns beamed from the northwest side for but a minute, enough to serve the purpose of a backup signal to patriots across the Charles River in case Paul Revere and a second rider, William Dawes, were apprehended or killed before they could deliver the British attack plans.

The British patrols were alert and, in no time, they were breaking down this same front door. Robert Newman made his escape from this window. The frame was bricked over and only discovered in the twentieth century. It was celebrated during the USA bicentennial by President Ford, who presented the replica lantern that now hangs with the candle lit.

If you look closely, this bust of George Washington is visible in the Old North Pulpit photograph in a niche to the right rear. It is the oldest image of our first president. The Marquis de Lafayette is reported to have said this is the best likeness of Washington he had ever seen.