View of Aconcagua Mountain at Sunset

After the Ocean Princess sailed off toward its destiny in my last posting, “Valparaiso Departure I,” Pam and I left the deck for dinner to return two hours later for the Regatta’s departure in the magic sunset hour.

This first photograph is 22 minutes before sunset as the ship swung into a course along the northern shore of Valparaiso Bay.  The city grew along the bay shore, starting from the city center in the southern cup and into the north.  We are looking southeast across a lighthouse named “Club de Yates”, identified from the red fiberglass tower, a triangular daymark, toward the north end of Valparaiso.

Here we see a different city altogether, the fourth largest of Chile and also within the Valparaiso Region and the Greater Valparaiso Area, named Vina Del Mar (Vineyard of the Sea).  The view is almost due east and, from here, it is difficult to discern why it is also called “La Ciudad Jardin” (Garden City), it is do densely populated.  North Valparaiso ends with a ridge with Vina Del Mar the next valley.  Look carefully along the shore to find the Punta Gruesa lighthouse with a red band on a white metal tower daymark.  By way of scale the tower is 56 feet high.  Follow Punta Gruesa to the right for the ridge separating Vina Del Mar (the taller apartment buildings, from Valparaiso.

The distant mountain is huge, visible from 95 miles away.  More about it later.

The previous photographs were using a tripod mounted Canon EOS-1Ds Mark III with the Canon 70 – 300 mm f4-5.6 L IS USM lens set to 108 mm focal length, taken 15 seconds apart.  I then swapped  the EF 24 mm f 1.4 L USM lens for the following photograph of the pilot boat heading to a rendezvous with the Regatta, having dropped off “our” harbor pilot.  It will wait beyond the harbor to bring the pilot back home.  The photograph is 7 minutes after the previous.  Punta Gruesa and the lighthouse and the Vina Del Mar apartment towers are just visible, having lost the sun. 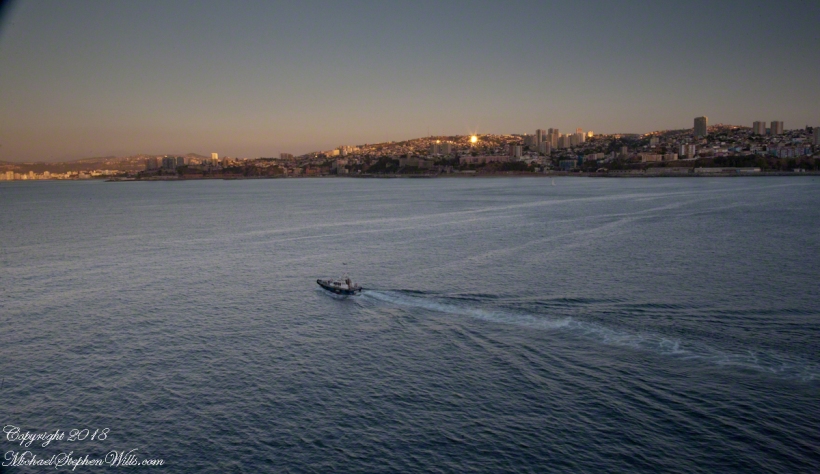 On the northern tip of Valparaiso Bay Punta Concon, the City of Concon and tall sand dunes also called Concon reflect the sun’s light 10 minutes before sunset.  The city is the fastest growing in Chile, 106% between 1992 and 2010 (28,157 to 50,000).  The Regatta is now well underway and I returned to the “long” lens here set to the 3oo mm focal length maximum.

On the other side of Punta Concon (Concon Point) the Aconcagua River flows into the Pacific.  Although the river has the same name as Aconcagua Mountain, the head waters are in Chile, 12 miles from the slopes of the mountain in Argentina.

A swivel of the camera brings Aconcagua Mountain into view.  This former volcano, dead now for 8 – 10 million years is the highest mountain in North and South America.  The next highest peak is in the Hindu Kush, 10,000 miles to the northeast.  That said, Aconcagua is less challenging than Denali of Alaska and so many people attempt it each year human excrement is a major pollutant there.  We are looking here over the Vina Del Mar Valley 95 miles to Aconcagua Mountain in Argentina.