Time to Move On and Remember

On this Christmas Eve we offer you our sincere wishes for a blessed celebration of your personal holiday tradition.

Carrying on the thoughts on lambency from my last post, “Christmas Ornaments 2018 III”, here is a macro of our Christmas tree.  There is no element of the Christmas celebration so puzzling to outsiders as the practice of sacrificing a beautiful tree, to drag it inside for display, presenting a part of the forest as a sacred object, touched by light or, in earlier times, tongues of fire (candles).

Stories of the fragrance of holiness, sometimes attributed to the Holy Spirit or Saints, are sprinkled throughout traditional Christianity within personal testimony and scripture as well as in our celebrations and rites as incense.  A character of the freshly cut pine that melds well with this tradition is the unmistakable fragrance of a freshly cut evergreen conifer , reminiscent of the precious, aromatic resin frankincense, one of the gifts to the infant Jesus from the three wise men of the east.  In spite of saving several dozen authentic trees, our artificial conifer has not acquired the sacred fragrance.

The first blown-glass bulbs, such as our large elaborate specimen of the photograph, were produced by heating sand to the melting point, putting a dab on the end of a very long heat resistant pipe.  When encircled by a clay mold, when the pipe is blown into the glass expands to coat with clay with a thin layer of glass.  The addition of silver and other shiny compounds allow the finished product to capture and reflect light.  Each bulb is its own lambent tongue of flame, licked with captive light.

“The problem with the world is that the intelligent people are full of doubts, while the stupid ones are full of confidence.”
― Charles Bukowski

It is necessary to find insights in unpleasant places. Take this quote from Bukowski, a reprehensible individual in that following in the totality of his actions will lead to bad results.  What can you say about a guy who believed his downtown Los Angeles neighborhood was ruined after the the pimps and whores were forced out?  Still, Bukowski wrote well about the personal truth of his self-made environment, one he drank, whored and wrote his way to become a present-day saint of atheists.

With Trump and his “War on Christmas” is analogous.  Trump does the magician’s, the practiced thief’s, slight of hand, distracting us while pocketing the coin, picking the pocket.  His use of this slight of hand is effective in so far the premise is true.  Sure, there is a War on Christmas.  It started 2017 years ago when Herod ordered the innocents slaughtered to destroy the rumored Messiah.  Then, as now, Herod was defeated by dreams and determined action.  This is a link to my take on the story, ““Christmas Angels”.

A return to Christmas Past brings us to the “Me” of the title and how Amol K. shared in our 2002 celebration.  Amol had arrived from India as a new hire for our team.  That fall I searched for a roommate to share in household expenses.  Human resources brought Amol and I together.  He required temporary lodging until his marriage planned for 2003. 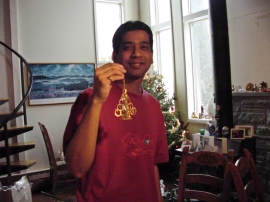 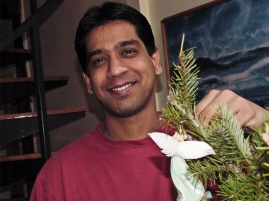 A single parent who raised a son alone, my Christmas preparations started immediately after Thankgiving with boxes of materials and decorations organized over fourteen years into beginning, middle and end boxes.  In this way, day by day, I gradually transformed our home for Christmas.  Workday evenings, unpacking a box at a time and laying out the contents.

The changes caught the attention of Amol.  Raise in a middle class family of Bombay, India, Amol, a practicing Hindu, asked questions about the objects and images slowing building with the month, the sun drawing down lower and lower on the horizon, darkness now falling soon after 4 pm.  Amol was curious to understand these new experiences.

Amol saw correlations with his own belief systems and stories and enjoyed helping decorate the tree on Christmas Eve.

We attended Christmas night mass together, shared presents Christmas morning.  It was not a question of Amol becoming a Roman Catholic proselyte, he enjoyed experiencing the stories, practices and celebrations of Christmas.

Beliefs and religious practices are like a sky scraper.  A push against natural law, constantly under pressure from gravity, wind, frost/thaw cycles and human fanatics who must see them come down by whatever means necessary.  “You must break eggs to make an omelet.”  This is a photograph taken on the returning training ship Empire State July 2001, less than two months before a fanatical suicide attack brought the Twin Towers down.

Happy New Year, remember to love your neighbor as yourself in 2018.