Meaning ‘of several colors’, versicolor reliably describes this fungus that displays a variety of colors. For example, because its shape and multiple colors are similar to those of a wild turkey, T. versicolor is commonly called turkey tail.

Polypores are a group of fungi that form large fruiting bodies with pores or tubes on the underside (see Delimitation for exceptions). They are a morphological group of basidiomycetes-like gilled mushrooms and hydnoid fungi, and not all polypores are closely related to each other.

Polypores are also called bracket fungi or shelf fungi, and they characteristically produce woody, shelf- or bracket-shaped or occasionally circular fruiting bodies that are called conks.

Most polypores inhabit tree trunks or branches consuming the wood, but some soil-inhabiting species form mycorrhiza with trees. Polypores and the related corticioid fungi are the most important agents of wood decay, playing a very significant role in nutrient cycling and aiding carbon dioxide absorption by forest ecosystems.

Surface of ice formed over a flowing creek. One is a HDR of three exposures, the other is a single exposure. Yes, that is dirt you see under the ice. How did that happen?

Readers: Can you tell which is the HDR? Please answer with a comment. Thank You

All are macros from a Kodak DSC Pro SLR/c with a Canon EF 100 mm f/2.8 Macro USM lens stabilized on a Manfrotto 468MG tripod with Hydrostatic Ball Head

My last post, “Frozen Fall Creek I”, ended with macros of Ice Crystals on a bed of frost over creek ice within sight of our former home, a restored water mill. I continued on the ice, following the creek to this spot were the stream bed turns 90 degrees, changing from a southerly to a western flow.

Here I encountered an open course where constant water motion resisted freezing. A few frigid days later, the course had an amazing transformation.

The transparent ice of the now frozen space retained the impression of movement, the surface rippled by current. In the following photograph, motionless ice crystals reveal the truth.

Here is the matching “after” photograph to the “before” that started this post. 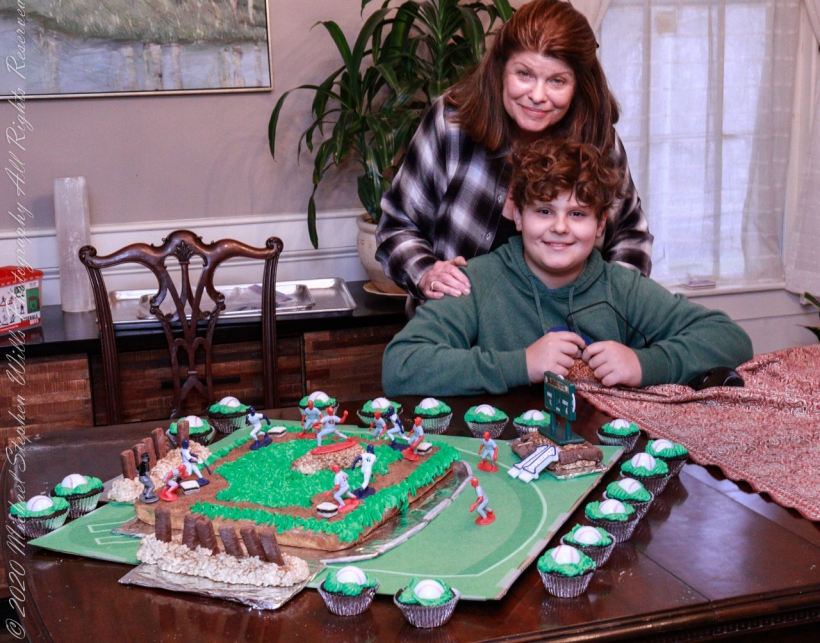 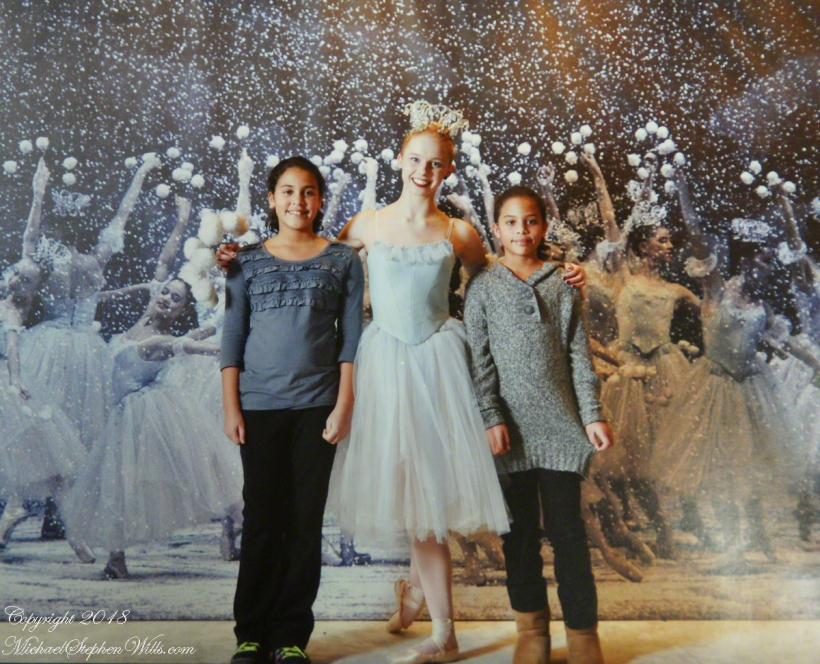 Our Nutcracker wooden figure carries a weight of memories.  Early memories are of my sister, Christina’s Sugar Plum Fairy solo for Saint Aidan Parish talent program, Mom’s appreciation of performance of Swan Lake in her pre-child past, a friend of my Mom was a former dancer who taught Christina ballet.  Hanging quietly, these memories swirl around the Nutcrackers open maw.

Thirteen years ago we observed New Years Day 2009 in the lobby of Winthrop Medical Center, Mineola, New York waiting for the outcome of Mom’s hip replacement surgery grateful the head of Orthopedics was performing the surgery.  That year saw large changes played out in the last four years of her life, she never returned to her home of 52 years.

From then on her winters were spent with her daughter Diane in Mesa, Arizona.  Mom would call us, amused at the sight of neighbors walking by in 50 degree weather in winter parkas.  She was well known in Albertson for her habit of walking everywhere, it was fortunate she never needed to learn how to drive a car: all she needed was readily at hand.

I needed to return to Albertson several times a year to our childhood home.  December 2009, Pam and I melded the trip with a day in New York City.  Memories of Mom’s enjoyment of Swan Lake drew me to purchase tickets for The Nutcracker.  The New York City Ballet has performed The Nutcracker every Christmas season since 1954, when I was one year old.  The 56th performance was our first.

As with Dante’s version of hell, the David H. Koch Theater has rings.  I sprang for the highest ring, the fourth, the least costly and, optimistically, the best vantage to view the formations of grouped dancers.

A full orchestra is dedicated to each performance, the hall acoustics are fabulous, and we were able to appreciate the scenes, the grouped dancers and, even, the soloists.  The last scene of the first act, the Snowflakes (or Snow Crystals), brought tears to my eyes, the music, the scene was impossibly beautiful and brought back some experiences of mine in winter nature.

We were hooked after that, immersed in the very real (i.e., non-virtual) alternate reality at least two Sunday afternoon performances each year, seeing all Tchaikovsky’s ballets in the style of Balanchine for which the New York Ballet is famous.  For the 59th season of The Nutcracker were brought two granddaughters, took fourth third row orchestra seats.  We marveled at the experience.  It included, during intermission, a photo session with a character from the performance.

Here they are with a Snowflake.  This is a scan of one of the 8 x 10 prints we received from this session.

We planned to share a performance of Swan Lake with Mom during the September 2013 season, in her 90th year.  Mom passed away in her birth month, June, 2013.

Cozy Snowmen dance round the candle

My dear wife Pam is the heart of Christmas in our home. Over the years we have collected a treasure of ornaments and knick-knacks she crafts into displays around our home. Pam completed the project well in advance of our grandchild holiday visits, before card writing and gift wrapping.

My contribution is a photographic time capsule. Here is some of my artistic output from this work.

This grouping of five cozy snowmen (three males, two females) are warmly dressed in knit sweaters and stocking caps; the women with long skirts. The five hold hands in a ring, rising from a common platform. We place a cup and devotional candle in the center.

The tiny group evokes community, harmony, amity. I captured them with a Canon EOS 1Ds Mark III dslr, a fixed Canon EF 100mm f/2.8L macro lens mounted on a Manfrotto studio tripod and hydrostatic ball head. Fixed lenses provide the sharpest macros. The mounting allowed precise framing and use of the widest aperture and a low ISO. The light sources were sunlight from a large north facing bay window, a Canon Speedlite 600Ex-Rt and the candle. When used, the flash was angled in various ways toward the ceiling.

I start with a tight shot, maximum aperture. A single figure is in clear focus, the remaining gradually lost in the bokeh. The flash was used. I can almost see then circling around the candle in a winter wind.

Here the candle is lighted, aperture narrow to f8 using only the candle and ambient light (no flash). The group is visible within surrounding figures. I backed away and the viewpoint is higher.

The candle light enhances the perception of community.

Viewpoint is closer, still only the candle and ambient light. Aperture widened to 3.5. I must remove the hair in lightroom.

I backed off, aperture at the max with only the candle and ambient light. The figures are placed in a tableau with other snowmen and a structure, a birdhouse.

Various reef fish set up “cleaning stations” where turtles and other fish come to have parasites nibbled off.

Coral reef fish live among or in close relation to coral reefs. Coral reefs form complex ecosystems with tremendous biodiversity. Among the myriad inhabitants, the fish stand out as colorful and interesting to watch. Hundreds of species can exist in a small area of a healthy reef, many of them hidden or well camouflaged.

Reef fish have developed many ingenious specializations adapted to survival on the reefs. Safe habitats, many different species of fish inhabit coral reefs where they are protected from predators and find food. In turn, reef fish eat algae, preventing overgrowth and smothering of the coral animals. Common fish in Caribbean reefs have interesting names: parrot, angel, puffer, surgeon and clown.

Coral reefs occupy less than 1% of the surface area of the world oceans but provide a home for 25% of all marine fish species. Reef habitats are a sharp contrast to the open water habitats that make up the other 99% of the world oceans. Loss and degradation of coral reef habitat, increasing pollution, and overfishing including the use of destructive fishing practices, are threatening the survival of the coral reefs and the associated reef fish. 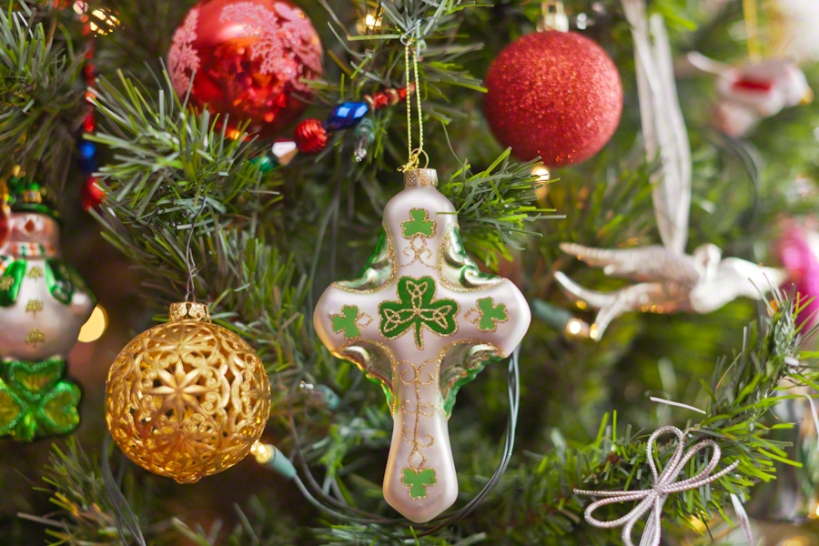 A previous post, “Christmas Tableau”, provides some context.  The photographs from that set were accepted by Getty for stock images.  Click the link to take a look:  “Cozy Snowmen” on Getty Stock.

This is part of my project to document our Christmas memories through photography.  Here we explore the Irish and Ireland themes of our decorated Christmas Tree.

Where would we be without Saint Patrick?  He was a force, to be sure.  A favorite story,  is the landing of his return to the island 432 AD.  The tides on the eastern coast of the Irish Sea can be strong.  His plan was to sail up to coast further north than what we call today Strangford Lough.  On passing this inlet the boat was swept into the lough tidal narrows.  Circumstances called for a landing, rather than wait for the tide.  Patrick came ashore where the Slaney River enter the lough and “quickly converted” the local chieftan, Dichu, who provided a barn for holding services.  The name of the town “Saul” in Irish is Sabhall Phádraig, translated as “Patrick’s Barn.”

In this posting I’ll go lighter on descriptions of technique.  Leave it to say I held to the Canon fixed lens EF 50mm f1.2L USM throughout.  Some, like the photograph of Saint Patrick, used a tripod.  Others, like the latter two of the following Irish Themed Cross set were handheld.  Generally a flash was used to supplement ambient sunlight from a large north-facing bay window.

Here the “celtic” cross is converted to an Irish theme through a substitution of a shamrock with golden decoration inspired by pagan neolithic petroglyphs for the nimbus (circle) intersecting the central intersection of arms and stem.

For the first three I played with aperture, taking advantage of the stability of a tripod.  The final two of the set are handheld.

Note the fanciful leprechaun snowman with pot o’ gold, on the left.

Lets’s finish up with a resin cast Santa Claus in hiking garb.  Hiking is a favorite activity of ours.  Featuring a stout staff and Aran Island sweater.

Adult dragonfly lifespan of a few days to 5 weeks contrasts with the wide distribution, variety with over 3,000 species and deep longevity of the infraorder, Anisoptera, especially compared to our genus, Homo: Hundreds of millions of years, compared to 2 million.

An insect, dragonflies live on every continent except Antarctica, from sea level up to the mountains.

I have experienced hundreds of dragonflies swooping and hovering around Peaked Mountain of the Adirondacks.