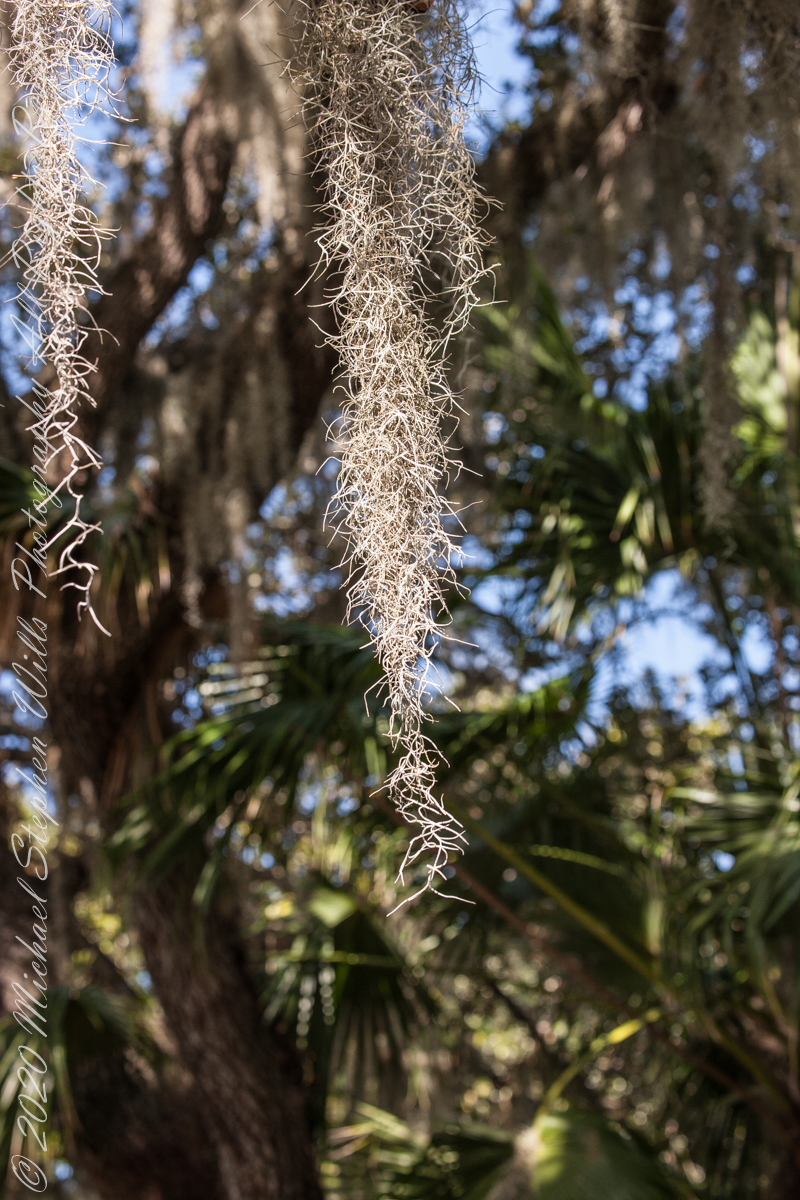 We spotted this stuff within minutes of arriving at McKee Gardens for an afternoon visit with the grandchildren. Festooned above our heads from thick Oak branches, I could not resist pulling out the camera for this photograph to capture the flavor of Southern Gothic. Fortunately, our group included neither deeply flawed nor disturbing characters, though we can confess to a touch of eccentricity.

Spanish Moss is neither moss nor Spanish. Scientific name Tillandsia usneoides, this flowering plant is in the family Bromeliaceae that includes pineapple. Here we have two epiphytic bromelias sharing the trunk of a palm.

A rootless epiphyte native to the tropical / semi-tropical Americas, Spanish Moss has a preference for southern live oak (Quercus virginiana) and bald cypress (Taxodium distichum) because of their high rates of foliar mineral leaching (calcium, magnesium, potassium, and phosphorus) that provides an abundant supply of nutrients to the epiphytic plant.

My two volume “go to” resource for plants and trees had sparse information about Spanish Moss and no wonder as it is a burden on trees, though not parasitic, and so more a pest than a decorative element to cherish. Surprisingly, Spanish Moss was purposely introduced to Hawaii where it is now known as “Pele’s Hair” after their fire goddess.

Click me for a dinosaur video from McKee Gardens. 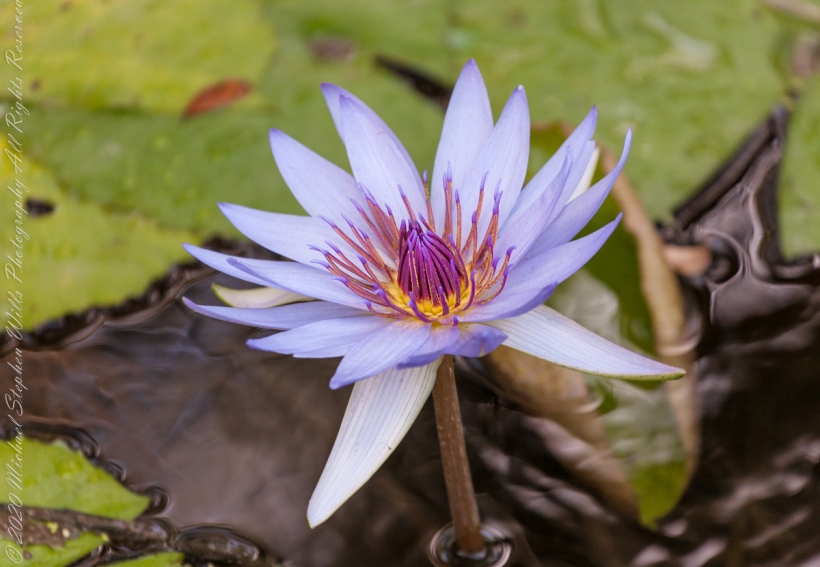 Congrats to all fathers and grandfathers, Happy Fathers Day

The McKee informative placard divides the Genus Nymphaea into “Hardy” and “Tropical” waterlilies. “Hardy” being plants native to temperate climates, such as New York State. I do not have photos of these from McKee. Nor are there examples of Lotus.

What I have is an abundance of the “tropical” varieties.

“The family Nymphaeaceae, of which the genus Nymphaea is a part, is thought to be the most basic of all the Angiosperms. A minute flower of the Nymphaea type was found in early Cretaceous deposits in Portugal, dating early waterlilies to at least 115-125 million years ago.“

“Angiosperm,” the word referring to all flowering plants, is composed to two greek words angio-. meaning enclosed, and -sperm, meaning seed. “DNA studies indicate the Nymphaeaceae separated from the rest of the angiosperm family tree…..before the separation of the monocots and dicots.” – see reference. 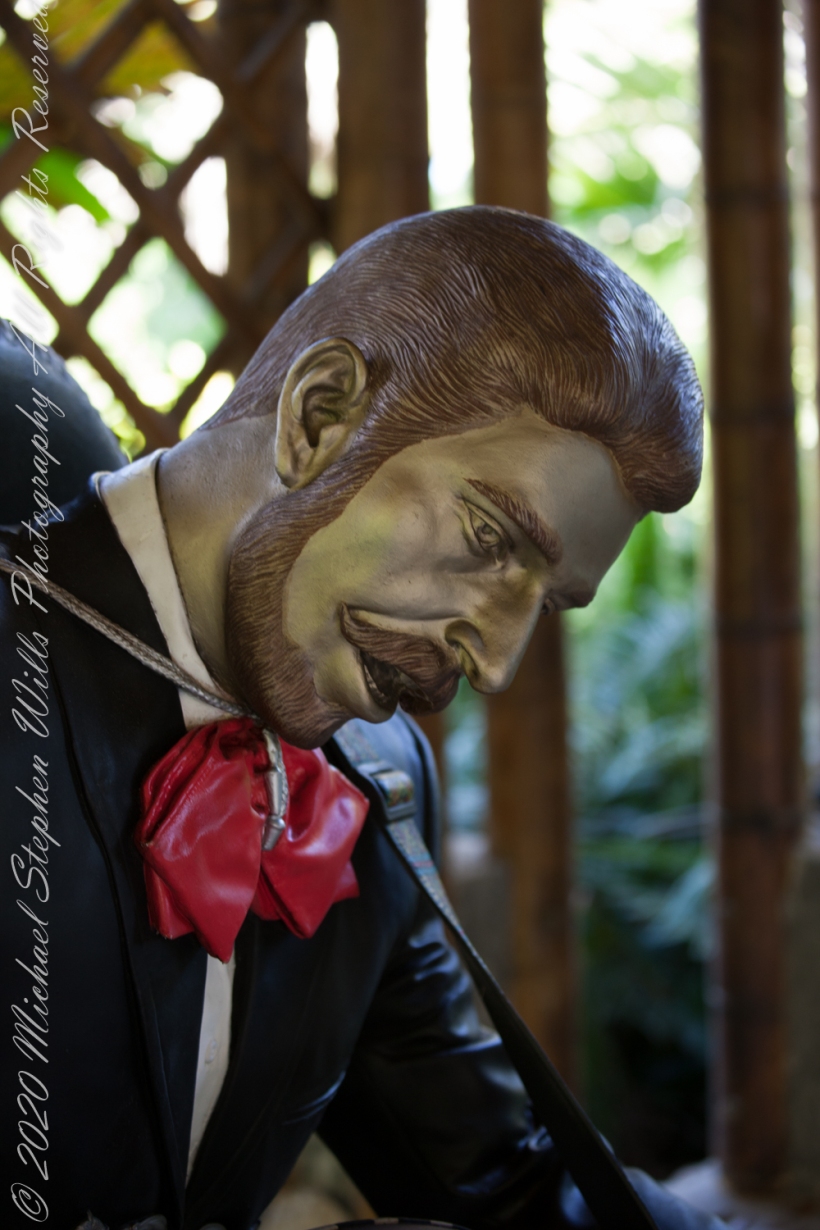 My final Seward Johnson sculpture posting opens with a piece of uncertain authorship, I just know it was not installed for our second 2020 visit just before COVID-19 hit.

Here we have a dynamic group, I can almost hear the music.

Click me for a dinosaur at McKee Gardens, Amargasaurus, a “small” sauropod.,

This set starts off with a nice guy at work. He was positioned on the large cafe windows. We met the grandchildren around lunch time, so we caught up around the food.

Click me for a dinosaur at McKee Gardens, “Herrerosaurus, one of the first“ 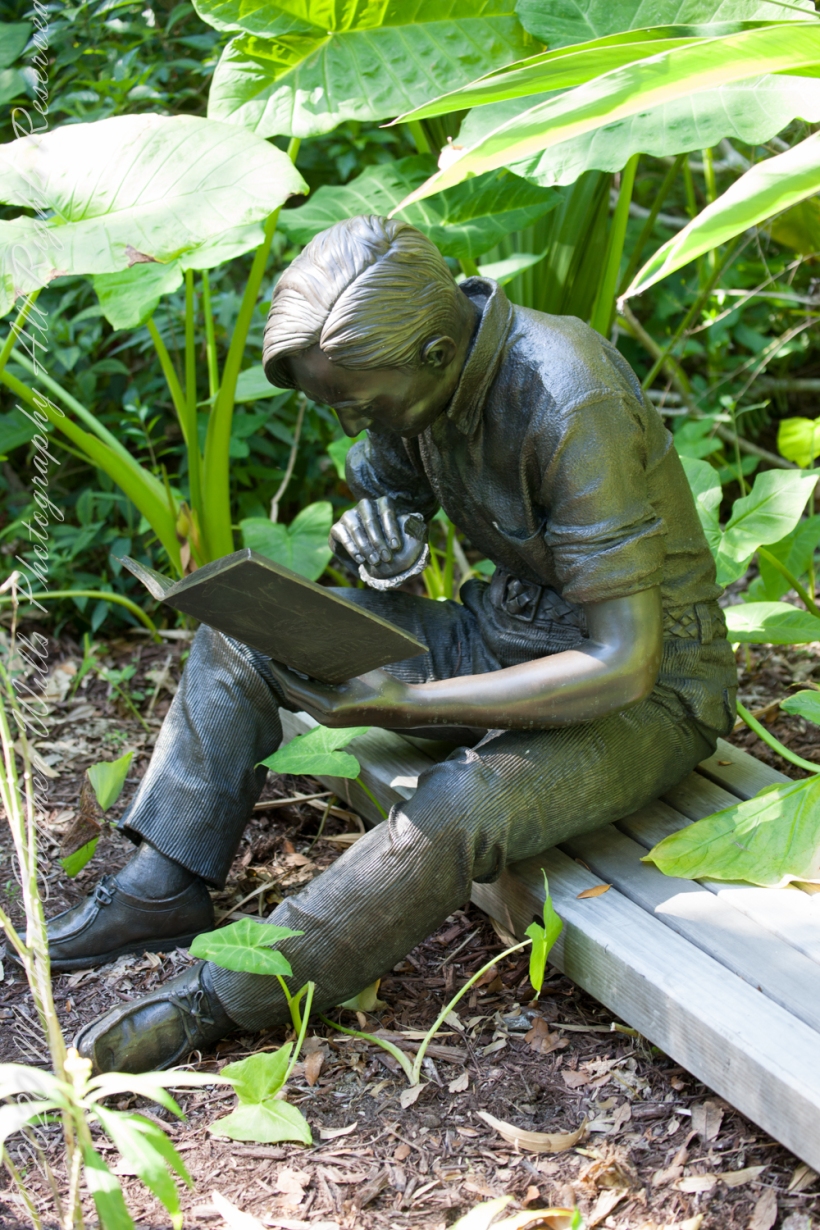 The visual narrative and accessibility draw the viewer in…..the exhibit included prop to be used for posing with the art work.

Request to readers: how will you participate? Include responses in the comments. Thank You 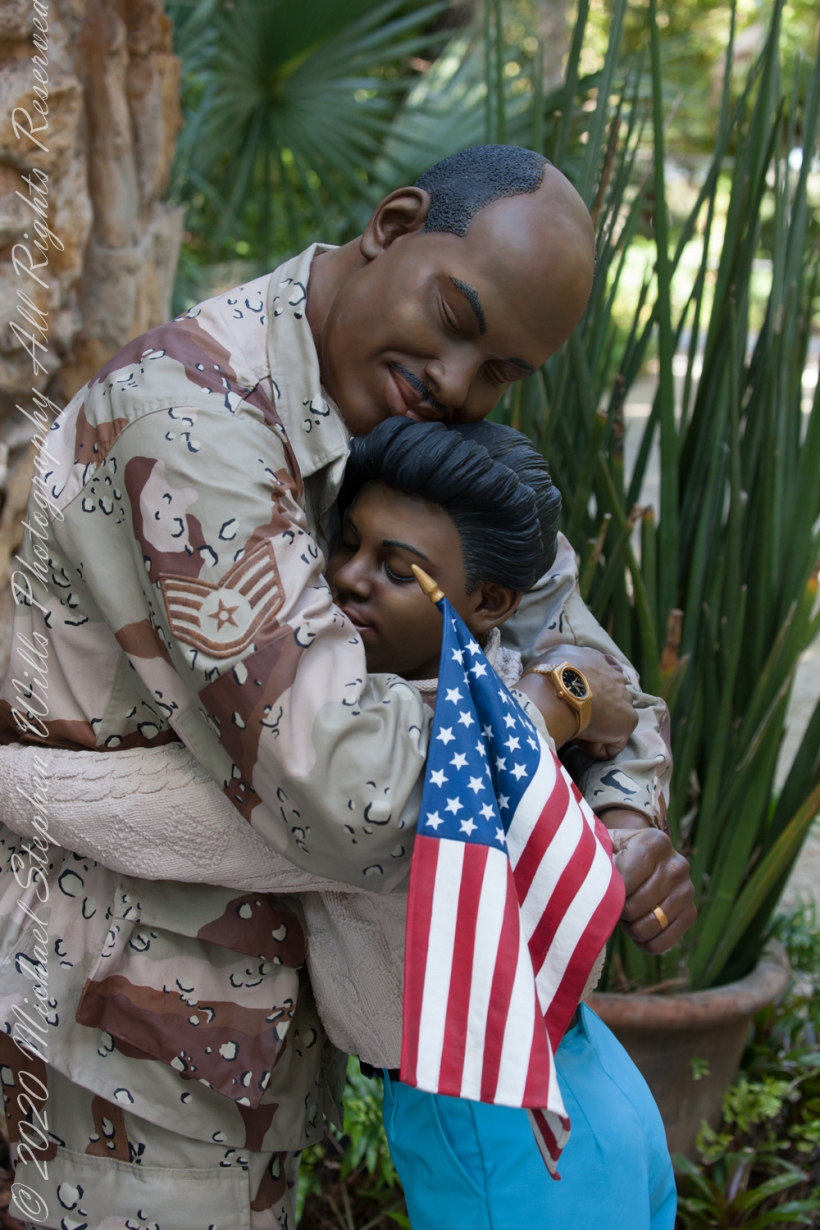 Snooty art critics look down their noses at Johnson’s work, calling it “kitsch,” sentimental and not worthy of display in art museums. It say, “this will be cherished when you are dust.”

A tug at the heart strings.

It’s all in the details.

Click me for a dinosaur at McKee Gardens, “Mimi, only one found.” 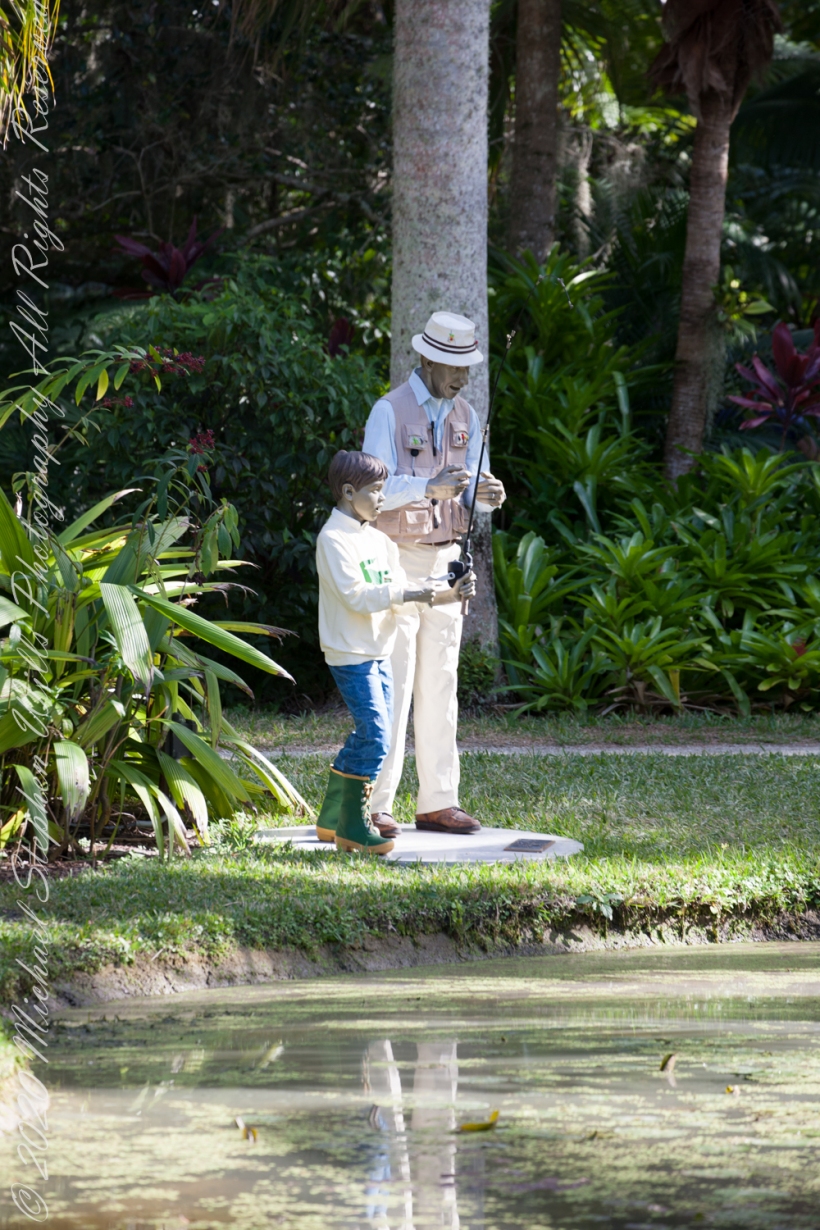 These three are story telling at it best a la Norman Rockwell.

Request to readers: make up your own stories and post as comments.

Click me for a dinosaur at McKee Gardens, “Baellynasaura, Big Eyes (?)” 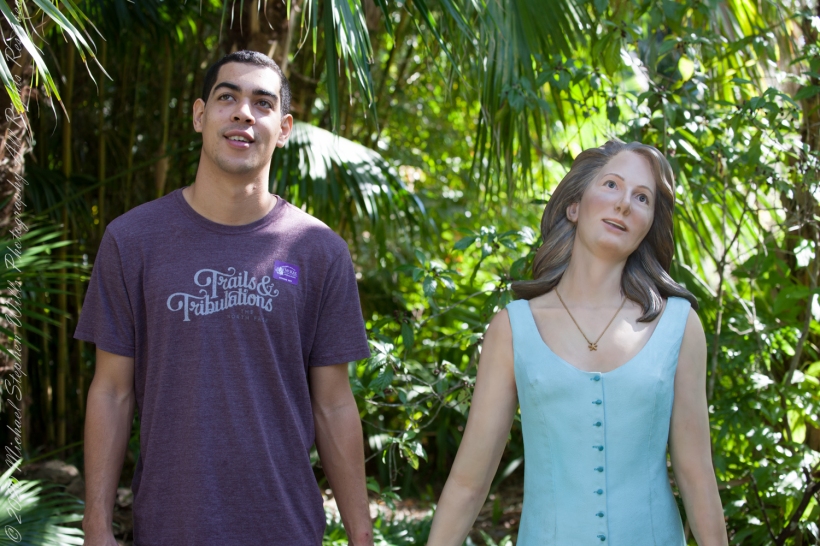 Here, sunlight through trees adds to the effect.

The effect here is to grab the other side of the picnic basket…..

Click me for a dinosaur at McKee Gardens, “Oviraptor, an egg protector.” 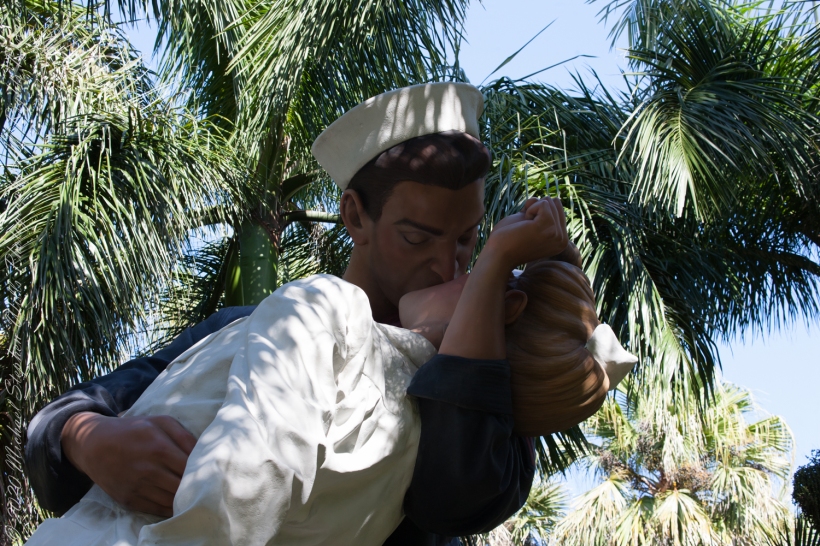 When grandson Taj first encountered a life scale Seward Johnson sculpture, he wondered out loud how, “They kept the cloths clean?” That is the effect trompe-l’œil technique strives for.

In the next sculpture, the response might be, “Ewhew, what dirty sneakers.”

There was one larger than life work on display, set most appropriately among the Royal Palms. 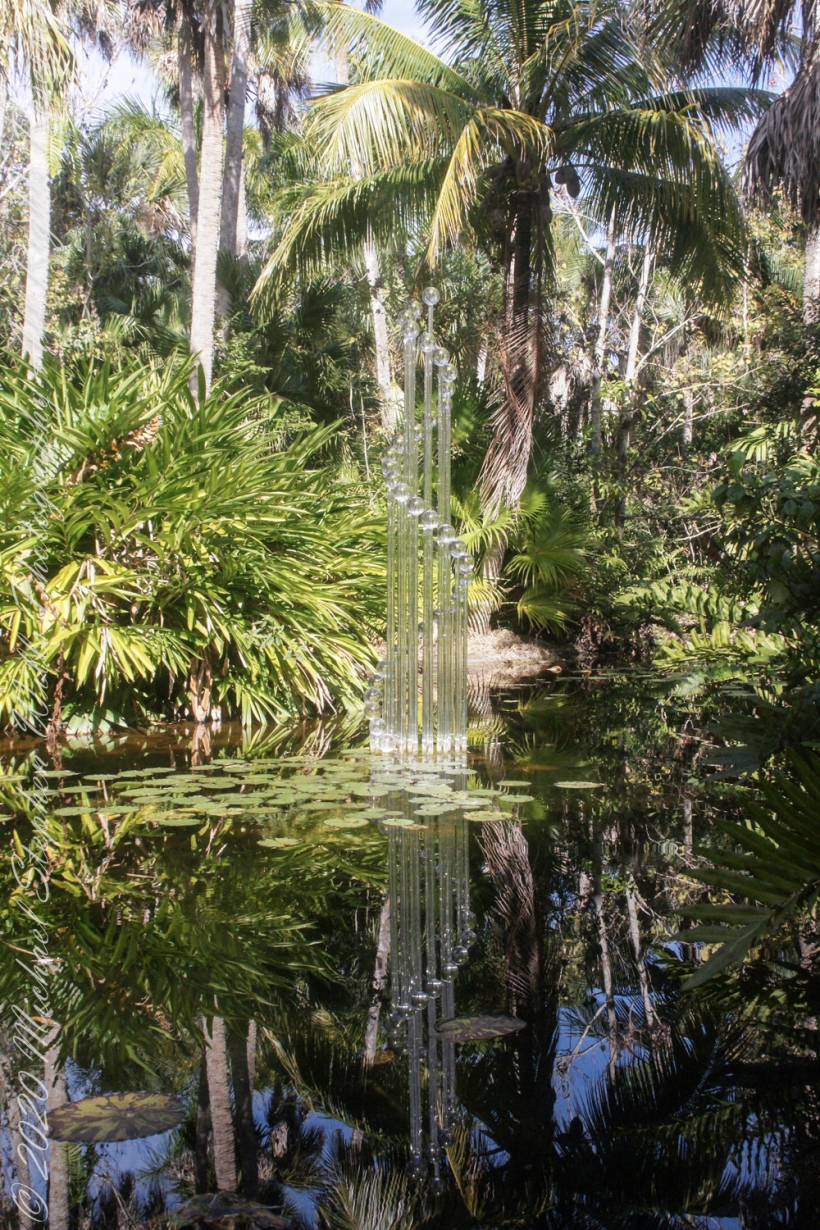 Tower is on permanent load from Frabel Art Foundation. In the late 1970s, glass sculptor Hans Godo Frabel created a small series of abstract sculptures of spheres connected to rods, forming unique clear shapes that render a beautiful play with light. This piece, entitled Tower, is a larger version of Frabel’s 1979 Tower of Babel.

Click me for a dinosaur at McKee Gardens, “Triceratops, one of the last.“

References: text is from the park placard with minor edits.