Lost gold mine legends tell of Saguaros bearing secret markings leading to the hidden location of rich gold mines. This specimen, perched on an ancient volcanic boulder, lives in LaBarge Canyon along the Dutchman trail.

Why are the hills red?

This view from Dutchman Trail was taken on the red line trail (below) between Black Top Mesa (out of view, on left) and Bluff Springs Mountain (right), on the approach to White Rock Spring and LaBarge canyon (the large canyon at the north end (left) of the red line.

Looking Northwest, in the distance is Malapais Mountain behind Red Hills. Volcanic rock and Cholla cactus in foreground followed by Prickly Pear and Saguaro cactus. “Malapais” means “bad country,” an apt description for this terrain where the skull of Adolf Ruth was discovered near the Red Hills. Three fourth of a mile away, the rest of him was discovered on the slope of Black Top Mesa by a search party, January 8, 1932. Ruth walked this same trail, passing this very spot. 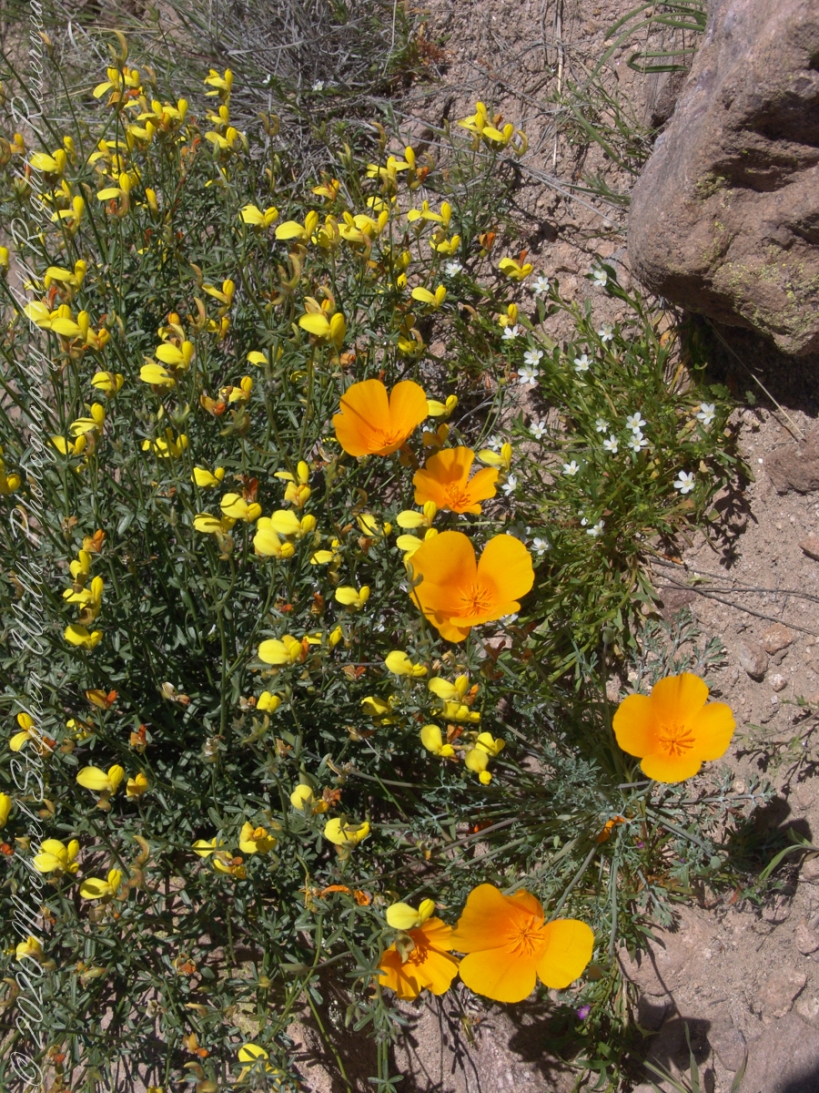 Those cliffs above the Dutchman Trail (in red from the push pin “Dutchman Terrapin Trail Junction”) climb 670 feet in 0.2 mile. Fifteen minutes after starting I stopped to photograph a group of wildflowers.

The bright yellow flowers on right are a member of the pea (Fabaceae) family named Wright’s Deervetch (Acmispon wrightii) I am able to pick it out from many similar flowers due to the characteristic narrow leaves with small hairs. These start out yellow, turning to red with age eventually forming brown seed pods. Mexican Poppy (Eschscholtzia californica) to the right.

The small white flowers are Chickweed (Minuartia macrantha) of the family Carnation (Caryophyllaceae). 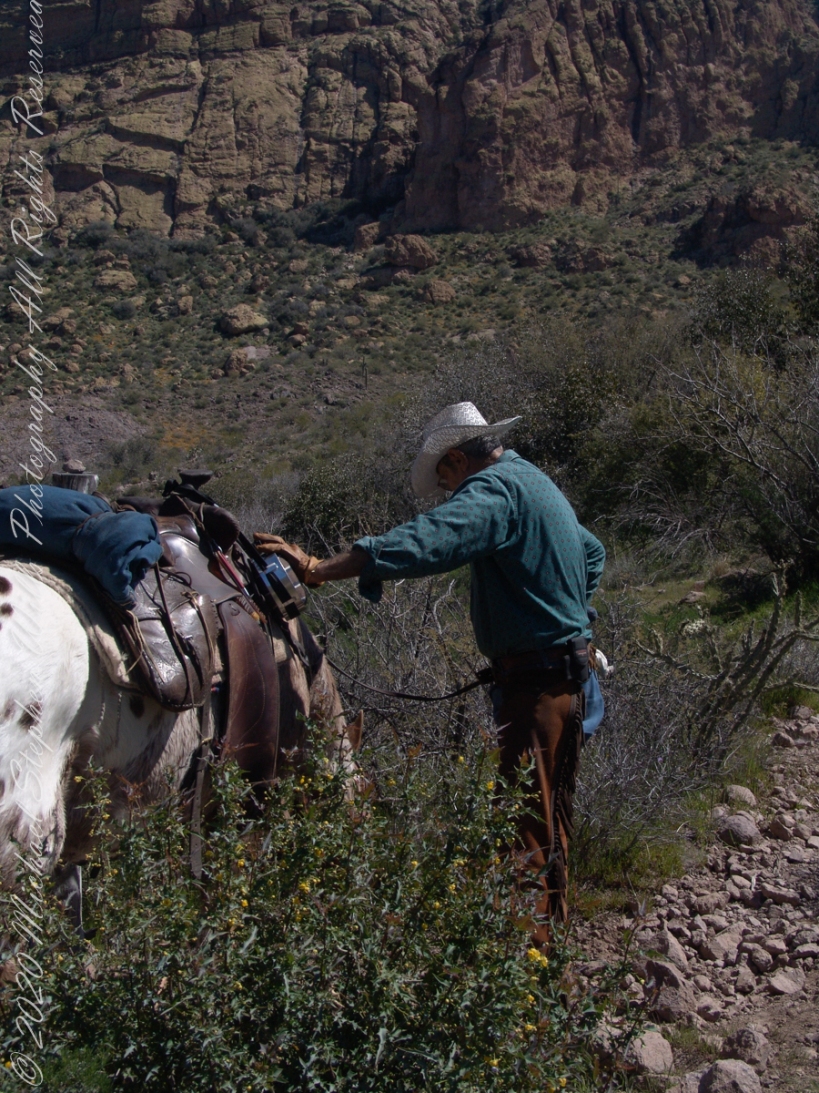 A Meeting of Expedition Members and Trails

The beetling cliffs off Bluff Spring Mountain loom over where Terrapin and Dutchman trails meet. Patches of yellow are Mexican Poppies blooming on the talus slope. Terrapin Trail climbs the ridge, to right. Here is where I caught up with mounted expedition members, the spotted rump of an Appaloosa figures prominently next to the signpost.

Terrapin Trail almost immediately starts a climb up to an eponymous pass between Bluff Springs Mountain and Weavers Needle. From here, it is the best way into the mountain. The trail name is a misnomer, as terrapin (Malaclemys terrapin) turtle habitat is near the ocean. There is a desert tortoise (Gopherus agassizii) you might encounter during the rainy season as they are otherwise inactive.

Click Me for another posting from Black Top Mesa

Al at Terrapin and Dutchman trails. His Appaloosa is enjoying fresh grass. 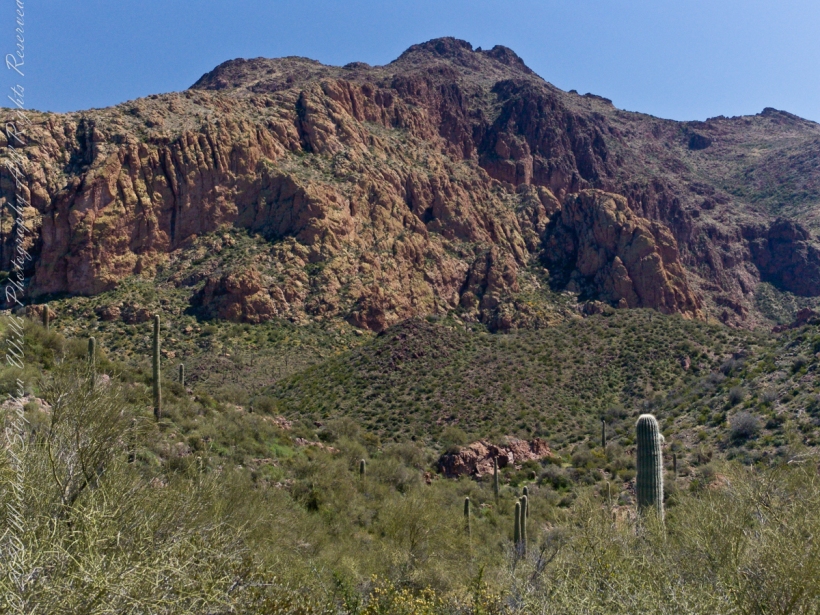 As we descended Upper Black Top Mesa Pass into Bluff Spring Mountain canyon we found, foreground, Palo Verde and brittle bush, and, midground, Saguaro. The presence of Palo Verde reveals water flows through this area intermittently though not enough to sustain a large tree. Palo Verde is in the pea family (Fabaceae), as evidenced by production of seeds in pods.

Calling it “Buff Mountain” some say the mountain is named for these buff-colored cliffs. Others, calling it “Bluff Spring Mountain” name it for the cliffs and the spring within a canyon on top.

Closer to the junction with Terrapin Trail this Bluff Spring Mountain ridge rose above us. A fine specimen of mature Saguaro cactus is in midground.

Click Me for another posting from Black Top Mesa

A climb up this ridge rewards a person with fine camping within a canyon on top of this mountain. This joy was reserved for a later trip I have yet to enjoy. Bluff Spring Mountain features prominently in the literature and stories of the Dutchman Mine and lost treasure.

Climbing out of East Boulder Canyon

Our second day began in East Boulder Canyon, in the following map it is at the foot of the “Z” of the orange line, the Dutchman Trail, lower left center. The shape is the signature of a switchback needed to negotiate a steep slope up to Upper Black Top Mesa pass. This day will see us traverse Dutchman Trail to the intersection with Peter’s Trail (yellow), another steep climb up Peter’s Mesa.

Here I used the “zoom” for a better view of distant Yellow Peak. In foreground is Brittlebush (Encelia farinosa) and Blue Dick. In the distance Saguaro Cactus. Below the cliff of Black Top Mesa, above East Boulder Canyon, is a patch of yellow, Mexican Poppy (Eschscholtzia californica).

Here is camera, set to zoom, is swung toward the mesa cliffs. Prickly Pear and Brittlebush growing along the Upper Black Top Mesa Pass trail. I have not identified the shaggy shrub above the Brittlebush. In the distance Saguaro Cactus (Carnegiea gigantean) flourishes. Below the cliff are patches of “gold dust”, the Mexican Poppy.

This post ends as it began, with wildflowers growing next to the trailon a March morning. Blue Dicks (AKA Purplehead) (Dipterostemon capitatus), Tidy Tips (Layia) — daisy like flower, Brittlebush flowers are yellow when not dried. The larger small white flowers are Desert Phlox (Phlox austromontana) — I have not identified the tiny white flowers sprinkled around.

Our camp for the first night was East Boulder Canyon, between Black Top Mesa and Palamino mountain. On the topographic map, below. the bright orange line is Dutchman Trail. We are at the lower center, at the foot of the “Z” in trail, a switchback over Black Top Mesa pass we’ll traverse the next day.

The map locates Yellow Peak, where the four Utah treasure hunters lost their lives Summer 2010, at the upper center next to Black Mesa Trail. The peak is framed by Black Top Mesa and Palamino Mountain in views to the northwest from Boulder Canyon, as you will see in a later posting.

Our evening was a quiet one of camp chores, an enjoyable meal with homemade beef jerky, coffee and plenty of water to rehydrate. The horses chomped on grain from feed bags. They packed in the grain as grazing is not allowed in the wilderness. I gave each a treat of carrot and apple.

I was up well before dawn to capture the morning constellations over Weavers Needle: from the left, I believe I recognize Lyra with Vega accompanied by Epsilon Lyra, next the keystone of Hercules. The brightest object is Venus.

Taking a break from morning water gathering in East Boulder Canyon: saguaro cactuses reflected in a still pool, looking up to the northwest you can just about see the Peralta trail where it crosses a Palamino Mountain ridge. West/Northwest the Peralta trail crosses behind the same ridge.

I cannot pick a favorite version from this series taken at sunset with a Canon 200 mm lens. Can you? If you have a choice, please name it in comments.

It is ironical the word “legend,” from the Latin verb “to read,” is the word used to describe the ahistorical stories, rumors really, of the Superstition Wilderness anchored, concurrently undermined, with the hard facts of geology. “Named for Paulino Weaver, a famed mountain man, scout, trapper and miner, Weavers Needle is a volcanic monolith that rises almost 1,300 feet from its base to an elevation of 4,553 feet. It’s the most recognizable landmark in the wilderness, and it’s also considered a marker for the legendary Peralta Mine.” — Arizona Highways

“As the story goes, Don Miguel de Peralta and his family, who had come to the Superstition Mountains from Mexico, discovered gold, lots of gold, in the shadow of Weavers Needle. However, before cashing in, according to the story, they were killed by Apaches, who allegedly sealed off the mine. A few decades later, Jacob Waltz, better known as the “Lost Dutchman,” claimed to have found the old Peralta Mine, but he died before proving his claim. Since then, thousands of treasure hunters have gone looking, including Arthur Weber and the Dons of Phoenix, but no one has ever found the gold. And it’s unlikely anyone ever will — the volcanic rock out there isn’t conducive to producing precious metals. They’ll keep looking, though. Meantime, the real treasure is the trail. Especially in the springtime, when the ground is covered with gold. ” –Arizona Highways

Here is a view of part of the day’s trail. We started at 1911 feet elevation, Apache Junction, topping 2693, Parker Pass, with 2512 our resting spot with many ups and downs in between: a combined descent of 1760. Our rest was well earned. Palamino Mountain is on the left, Black Top Mesa the right. Look carefully to see the Peralta Trail surmounting Palamino Mountain ridge, descending in a zigzag to Boulder Canyon where it terminates on Dutchman Trail.

Click me for more information about the Peralta Trail from Arizona Highways.

Our eleven-mile trek from Apache Junction ended here between Black Top Mesa and Palamino Mountain. Peralta trail winds up the ridge to right with Weaver’s Needle beyond in the setting sun.

Deep shade combined with the distant sunlit needle made for a difficult photographic capture. In fact, this picture needed significant work in Photoshop. I wore the 8 megapixel Sony F828 to capture the handheld shots of this series. A few days later I dropped the camera while riding Colorado, rendering it inoperable. This was when I acquired my Sony Alpha 700 during downtime in Phoenix. Later, the F828 was repaired at Sony and is still operable.