Hard on the Ithaca City Cemetery is our version of the crookedest street. Cascadilla Park road ascends East Hill as a series of switchbacks, charming homes cut into the hillside. A foot path overlooks the gorge, seen here.

A brass plaque commemorates Daniel D Tompkins on eponymous Tompkins County courthouse. When the county was formed, 1817, Daniel Tompkins was a former governor of New York and Vice President to James Monroe. Tompkins never visited “his” county, there is no other connection between him. His family and life was rooted in eastern part of New York, around “The City.”

I am not finding the attribution for this undersea idyll, also on the Seneca Street garage adjoining “Feels Like Ithaca.”

This completes my Sunday afternoon walk around Ithaca.

We pick up this walk through Ithaca from the December 23rd post, next to a waterfall and the “Theory Center,” starting with the spiffed up rear façade of the Cornell Health Building, renamed from Gannett Health after a right wing newspaper publishing magnate. The building fronts “Ho Plaza” thus carries an address with unfortunate allusions, named for a distinguished Cornell alumna who’s family name is Ho. I included this building in appreciation to Cornell University and students for being good neighbors during this COVID-19 pandemic, controlling the virus.

Today, I avoided the views of the popular Lib Hill to minimize personal contact. Instead, descending the hill on footpaths, found myself on Stewart Avenue and the eastern side of City Cemetery.

Enjoying the solitude and long shadows of our northern afteroon.

Traversed a gate of hemlock branches….

Admired random monuments. By the way, George Washington Schuyler, whose family anecdote I shared in a previous post, rests here under an impressive stone. Not this one.

Walking the Lower Cascadilla Gorge Trail from the end of Court Street, downtown Ithaca, named for the Tompkins County Court is a favorite way for students to walk from the Cornell Campus.

I avoided the route today, the trail is narrow, much less than the 6 foot minimum distance. The footpath from Eddy Gate to College Avenue passes where the trail climbs up from the gorge. I did opt to catch the Upper Cascadilla Gorge trail, much wider. The trail passes two footbridges accessing the Engineering Quadrangle and the main Cornell Campus. Photographed here is the approach to the second, smaller, footbridge.

Late fall/winter afternoons the “Golden Hour” is hours long for this view of the footbridge and waterfall.

Waterfall views from the bridge. I left the tripod at home, so these exposures “freeze” water motion.

Look up from the other side for this view. Baptized 1985 as “The Theory Center,” 2007 saw the name changed to the more evocative, “Center for Advanced Computing.” It always filled with supercomputers. Socially, the culture of the place was retrograde from the beginning with “faculty only” lounges that kept out the lowly staff members. As if on cue, I came upon a group of the privileged, unmasked, strutting down the hill toward me, like vacuous moles. 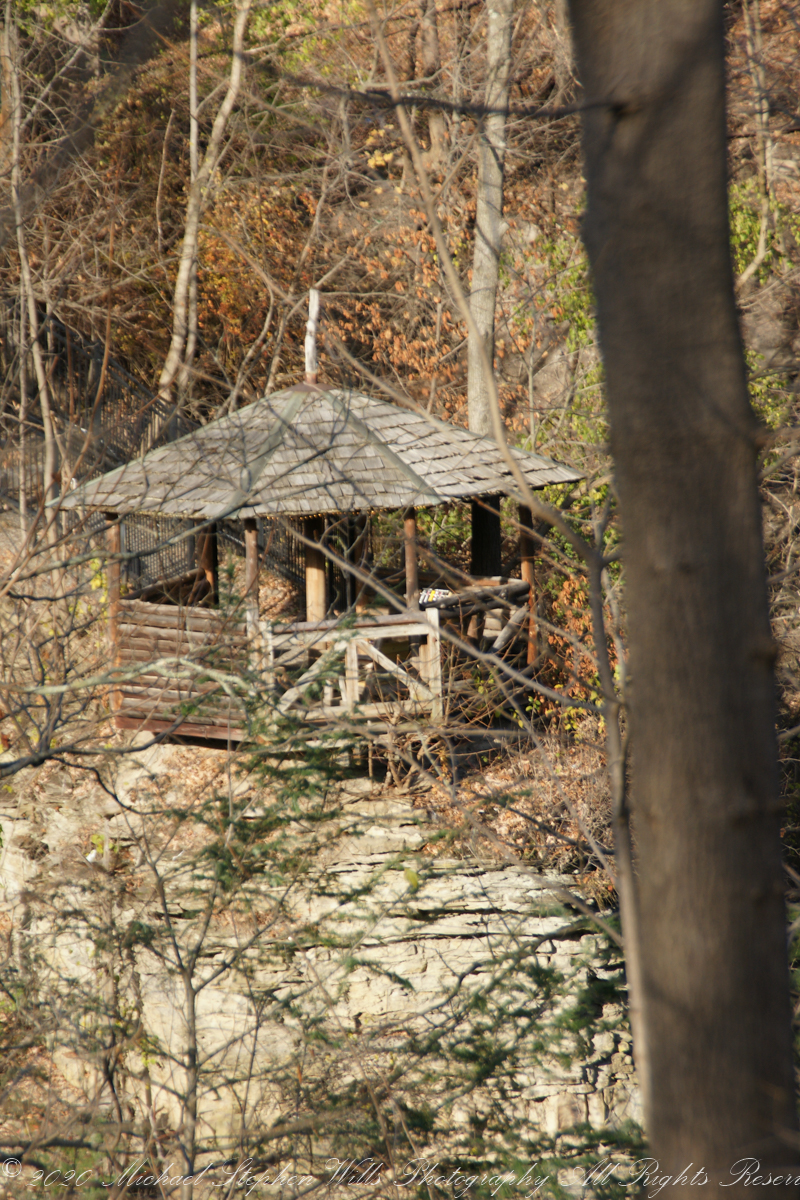 At this point most of the climb from downtown Ithaca is behind me and the Cornell Campus is underfoot. I pass the Eddy Gate, the former main entrance to Cornell University, where Eddy Street vaporizes to become a footpath along the rim of Cascadilla Gorge. This ramshackle hexagonal structure rest on the friable shale gorge rim. It does NOT look inviting and, over the years, I’ve not spotted a single person hanging out there.

As I duck into the Upper Cascadilla Gorge Trail above College Avenue a poster visualizes an effective defense against crowd control munitions, the umbrella. Below the call to “Stand with Hong Kong” is another newsflash/movie review from outside the mainstream media, “Donnie Darko Makes No Sense.” 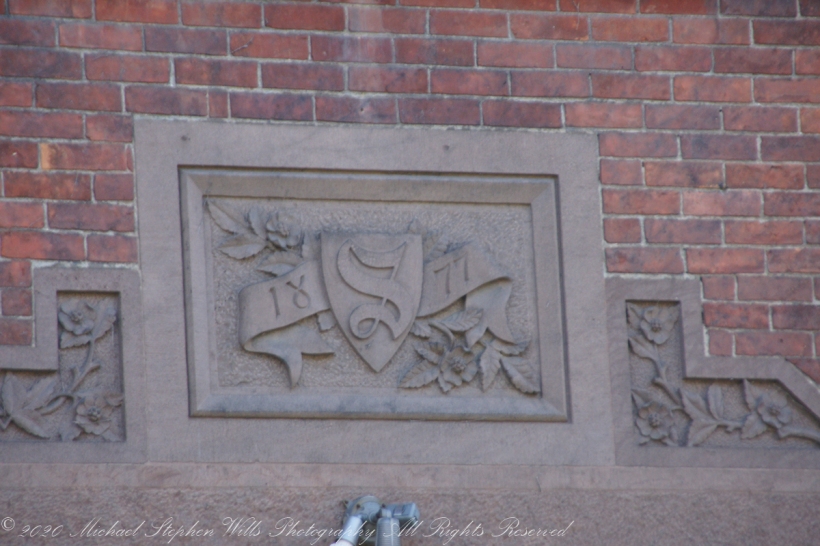 Today a large fox devoured a squirrel on our front lawn while I wrote this post. Further up Green Street is this mural, I do not find an attribution and assume it is from 2020.

Continuing past all the new development in downtown Ithaca, I head up the steep sidewalk up east hill on Seneca Street, named for the Iroquois Confederacy tribe of the westernmost lands. Here is a flowering tree with attractive red haws growing on the corner of Seneca Street and Schuyler Place.

From the doorway of the former Henry W. Sage mansion at 603 E. Seneca St designed by William Henry Miller in1876. Today, it is broken into six apartments. This is the Sage of Cornell University Sage Chapel. Henry Sage was a supporter of admitting women to Cornell to the extent of donating $250,000 around the year 1870.

206 North Quarry Street, the northwest corner of Seneca and Quarry. It, too, once a single family home now broken into apartments.

A family story and artistic expression

Across the street from Tompkins County Public Library, next to City Hall, is the Green Street Garage decorated with artistic graffiti by the French artist Amir Roti.

Completed during Fall 2012. This artist’s style is seen around town, black and white with touches of blue of inscrutable, dream inspired (?) scenes. The winters winds do whip through these streets.

A few steps away, some propaganda. I recognize the characters as Native Americans from the feather object. Doing some research I found it was completed in 2014 by Brandon Lazore here is some text from the artist, “”Women’s Nomination” is dedicated to all Haudenosaunee women. A silhouette of “Sky Woman” falls from Sky World. In moments, she will be caught by flying geese & put on turtle’s back – “Turtle Island.” In her hands she holds roots of the 3 sisters – corn, beans, & squash. The woman in green represents Clan Mother, grandmother, elder. The woman in purple is her daughter & the baby is her daughter’s daughter. The wampum belt is the Women’s Nomination Belt which represents, among other things, the right that Haudenosaunee woman have to give their child a clan, to chose names of children, & to choose chiefs. Strawberries represent medicine like mother’s love is medicine to a child. The moon represents fertility & how it’s cycle plays a huge role in every woman’s life. The Sky Domes are inspired by traditional art decorating our clothing for centuries. It represents the sky world & the plants that were given to us – corn, beans, squash, & tobacco.” Haudenosaunee are also known as Iroquois.

To counterbalance the sentimentality of the mural here is historical context, a family anecdote from George Washington Schuyler of Ithaca, New York from the life of his paternal ancestor, Peter Schuyler, known to the Mohawks as “Quidor,” as told to the author, John Fisk, in 1881. “After a severe tramp in the wilderness, half starved with hunger and cold, Quidor came on evening upon an encampment of Mohawks, where he was cordially welcomed. In a few moment he was seated before a bright blaze, with a calabash of hot soup, the most delicious he had ever tasted. Presently, when he dipped his rude ladle once more into the kettle and brought up a couple of parboiled human fingers, it gave him a queer turn, but he repressed all show of feeling and quietly asked a feathered chieftain, ‘What is this soup made of?’ The chief as calmly replied, ‘Of a Frenchman we killed this morning; isn’t it good?'” Words even more significant because I would soon walk past the grave of George Washington Schuyler, laid to rest 132 years ago.

The Dutch and Quaker Colonies, Volume II, by John Fisk, The Riverside Press, Cambridge, 1899, p214 “Peter Schuyler and his influence over the Mohawks”.

This Sunday past I parked the car downtown (free parking Sundays) and walked the walk, carrying the Sony Alpha 700 with the variable 18-200 lens. Today is a contemplation of beginnings. Here is a mural dedicated to the founding of the Cornell Library Association, titled “Ezra Cornell”, completed 2016 by Nestor Madalengoita.

It was the 1779 Sullivan – Clinton Revolutionary War expedition against British Loyalists and allies, the Iroquois confederation, that opened up Central New York to settlement, making possible the 1,400 Dewitt acres that is now the City of Ithaca, named, strangely, after an Aegean island with Hector Street, our road to downtown, recalling the foremost defender of Troy.

On the 2020 AD winter solstice

In modern life, disconnected from nature, the steady movement of the sun’s course is not a concern. “This year, will the sun not stop this southward journey (northward in the southern hemisphere) and winter never end?”

Here is a monument to human skill and ingenuity from the Engineering Quad of Cornell University. The unusual, turreted building is the Johnson Graduate School of Management across Campus Road.

Here the sundial arms seem to embrace the sky, with Duffield Hall in the background across the Pew Engineering Quadrangle.

Inscription of human wisdom and knowleged.

To those responsible for this wonder. On this day it was keeping perfect time, I corrected the time on my camera from the sundial reading.

Click photograph for larger view. Use combination keys to enlarge/reduce: Ctrl+ (Control / Plus) and Ctrl- (Control / Minus)

Click to view my Finger Lakes photographs on Getty. 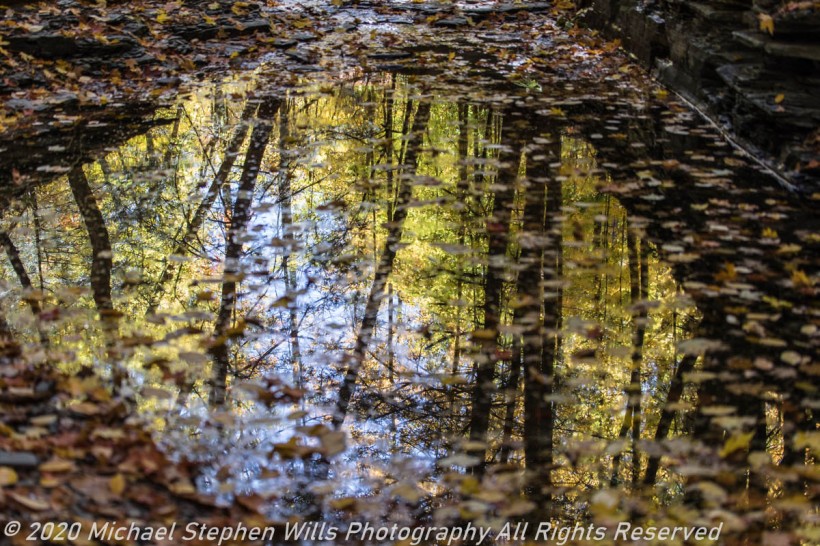 Click photograph for larger view. Use combination keys to enlarge/reduce: Ctrl+ (Control / Plus) and Ctrl- (Control / Minus)

Click to view my Finger Lakes photographs on Getty.