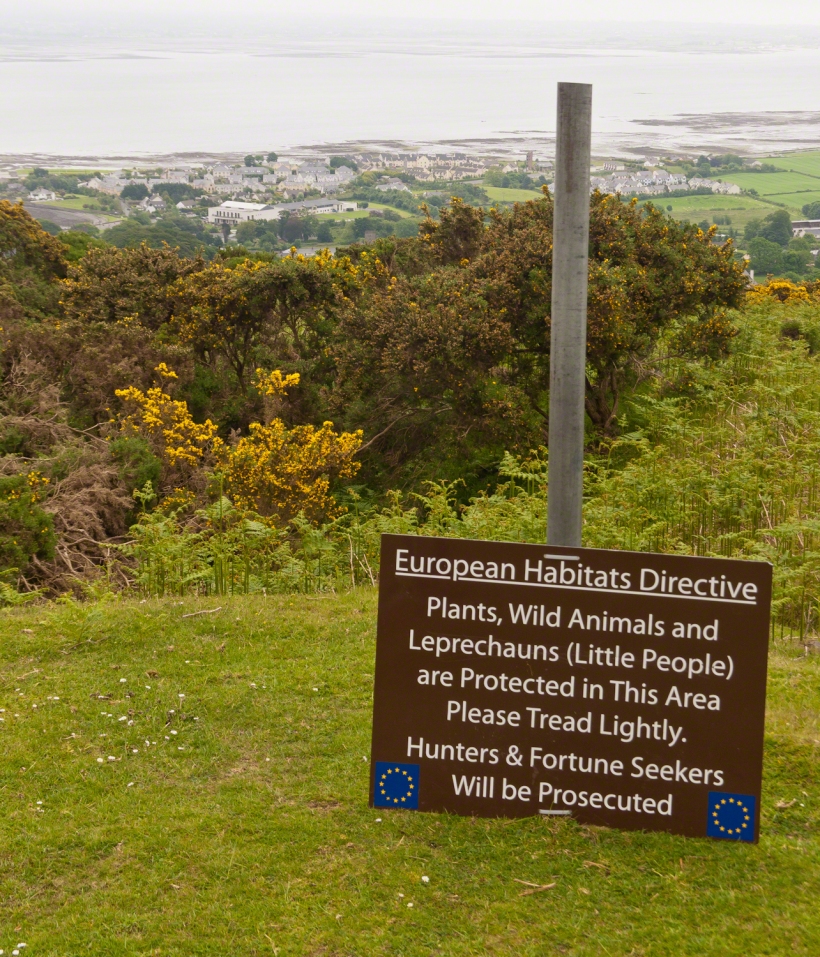 In a previous posting we hiked through the only European Union Leprechaun Preserve on Slieve Foy above Carlingford, County Louth, Ireland.

This home was lower on the mountain, on the way to town.

You will not find Calla Lilies thriving in front yards here in Ithaca, New York (43 degrees north latitude) as they do in the Temperate Oceanic Climate of Ireland, pictured in Carlingford on a June day.  At 54 degrees these Calla Lilies are growing at a latitude 800 miles north of Ithaca, in the middle of Quebec Province, Canada.

In spite of this, here in Ithaca we keep March 17th, Saint Patrick’s Day, warm.  In the home of our three grandchildren (3, 4 and 6 years old) who live in Ithaca they celebrate by playing tricks on Leprechauns.

This year, we visited Saint Patrick’s Day eve and reviewed their bag of tricks with the Leprechaun in Chief, their Mom.  In response, the Leprechauns leave them letters to make it clear the tricks did not work.  On top of this, the children have big laughs on the tricks played in return.  A favorite is finding their socks taped all over the mirror.

Mom pulled out a few of the Leprechaun letters and we read them for the children to great laughter as they remembered tricks of previous years.  Afterwards, when alone with Mom, Pam and I recalled the tradition in Chicago, to color the river green (a well as green milkshakes, etc), and suggested to the Leprechaun in Chief to put green food color in the toilet.  It was a winning idea.

The next morning Mom, on hearing the toilet flushed repeatedly, found her 4 year old daughter totally appalled.  “The Leprechauns used our toilet (and did not flush).  YUUUUKKKK.”  She then ran upstairs hoping for a “clean” bathroom up there.  Well, green milkshakes are off the menu.

Thoughts on the Fifth Century return of Saint Patrick to Ireland

In follow-up to my last post my IStock photograph of Saint Patrick on the Hill of Tara was accepted and is available for viewing (click the link to go there).

Since July 2008 SeaGen produces electricity (1.2 MW) for between 18 and 20 hours a day while the tide is forced in and out of Strangeford Lough through the Narrows where the generator is installed. SeaGen is the first large scale commercial production of electricity from the tide. Located between the Northern Ireland towns of Strangeford and Portaferry, the strength of the tides there were used by the earliest tidal mill known, the Nendrum Monastery mill dating 787 based on archeological excavation.

History records Patrick converted the island of Erin (Ireland) to Christianity in the Fifth Century AD as a return to his place of captivity and slavery.

There is a connection between SeaGen and the return of Patrick to Ireland. The first sanctuary dedicated by Patrick was at Saul, County Down not far from River Quoile that drains into Strangeford Lough. Historians identify Patrick’s first landing site, upon return, as Wicklow where he was forced to leave by the locals. Heading north in the boats of the time, the strong tide of Strangeford Narrows pulled them into the Lough and, from there, headed up the River Quoile to encounter the local chieftain, Díchu mac Trichim. Patrick’s first Irish convert to Christianity, the feast of Saint Dichu is April 29.

On June 7, 2014 Pam and I visited this area. Here are some photographs of the traditional burial place of Saint Patrick.

Please browse my reasonably priced stock photography. License a photograph, download and use it for your website or blog. Click this link to browse all my Getty IStock Photography offerings.

Or click this link or any photograph or this link to select a print with custom framing from my “Ireland” Fine Art Gallery.

Yesterday, I simultaneously published nine photographs on my ImageKind Ireland Gallery and Getty IStock (click the links to visit): nine views taken from the slopes of Slieve Gullion.

Sunday, May 25, 2014 was a happy day for Pam and I.  It was the first full day of an eighteen (18) we filled with Ireland, travelling in a loop of the island following the coast from, naming the counties where we spent time on the ground, Louth, Armagh, Dublin, Meath, Wicklow, Cork, Kerry, Claire, Mayo, Antrim, Down and back to Louth.  The counties of Northern Ireland are in italics.  Indeed, at this time the politics allowed us to travel freely between the Republic and the North.  That day, our morning was spent in Louth attending mass, enjoying our first meeting with the family over a substantial mid-day meal (click the link for my Facebook album of the meeting).  We split off that afternoon to visit the home of my cousin, Mary and her husband Joseph McCreash in County Armagh, just over the border.  When Joseph offered to drive us over to Slieve Gullion it was totally new to us, we had no conception of the place or what to expect.

It was such a gift, we are grateful to Joseph for this experience.  Only in 2018 when, at 64 years of age as a “dislocated worker”, was I able to research the place and spend time developing the photographs for publication.  Two of the photographs illustrate this posting, to view the others in my online gallery, click either photograph.

Slieve is the Irish language word for “mountain.”  Slieve Gullion is a lone eminence, one remnant of volcanic eruptions about 60 million years ago during the rifting of continents that produced the Atlantic Ocean.  Around the mountain is the Ring of Gullion, a string of hills, 26 miles by 11 miles, surrounding the mountain and formed from the ancient collapse of a volcanic caldera.  The technical name for it is a Ring Dyke and it was the first of its kind to be recognized and mapped, well before the nature of the formation was understood of be volcanic.  The name Gullion is derived, in one formulation, from the name of the metalsmith, Culann.  In Irish Myth, Culann’s home and workshop was on the slope of Slieve Gullion.  A wealthy and respected personage, Culann invited  Conchobhar mac_Neasa, king of Ulster to feast.  During his approach to the mountain, passing through the surrounding plain, the king stopped to watch boys play hurling.  Among them was the future hero of Ulster, the young Sétanta.  Impressed with Sétanta athletic abilities, the king invited him to join in the feasting at Culann and the boy promised to follow after the game.  Later, while climbing the mountain to fulfill his promise Sétanta was attacked by the guard dog of Culann.  The myth says the dog was killed by Sétanta in self-defense.  Never the less, in compensation to Culann, Sétanta committed to rearing a replacement and to act as guard dog in the meantime.  In this way he became known as Cu Culann, “the dog of Culann.”  Click for more about Cu Culann.

On the summit two cairns north and south of a small lake, tangible proofs of ancient peoples and beliefs.  The north cairn is a more ancient passage grave, 90 feet wide, 16 feet high, the opening aligned with the setting sun on the winter solstice.  The cairn north of the lake is less ancient containing two cist burials.  For our visit Joseph drove us along the 8 mile drive.  The following is an image of a viewing platform and the road.  Just beyond, on the right, where the ridge meets the road, is the trail to the 1,880 foot summit of Slieve Gullion.  Our arrival disturbed sheep resting on the asphalt.  I’d have loved to spent a day climbing the summit, but it was not to be this trip. 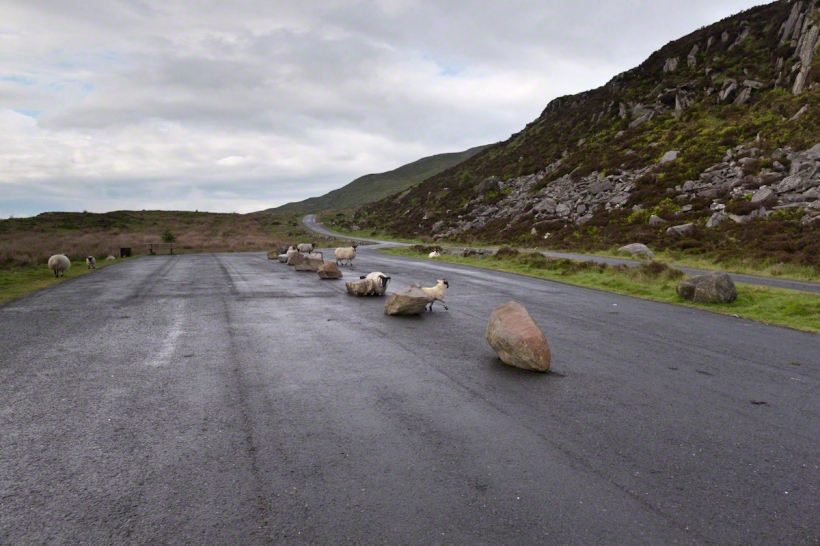 The way is part of the Slieve Gullion Forest Park.  Throughout are turnoffs to admire the view.  It was during our frequent stops I pulled out the photography gear to grab the views.  Here is one, looking southwest.  For the other views, click either photograph to visit my Online Gallery of Ireland. 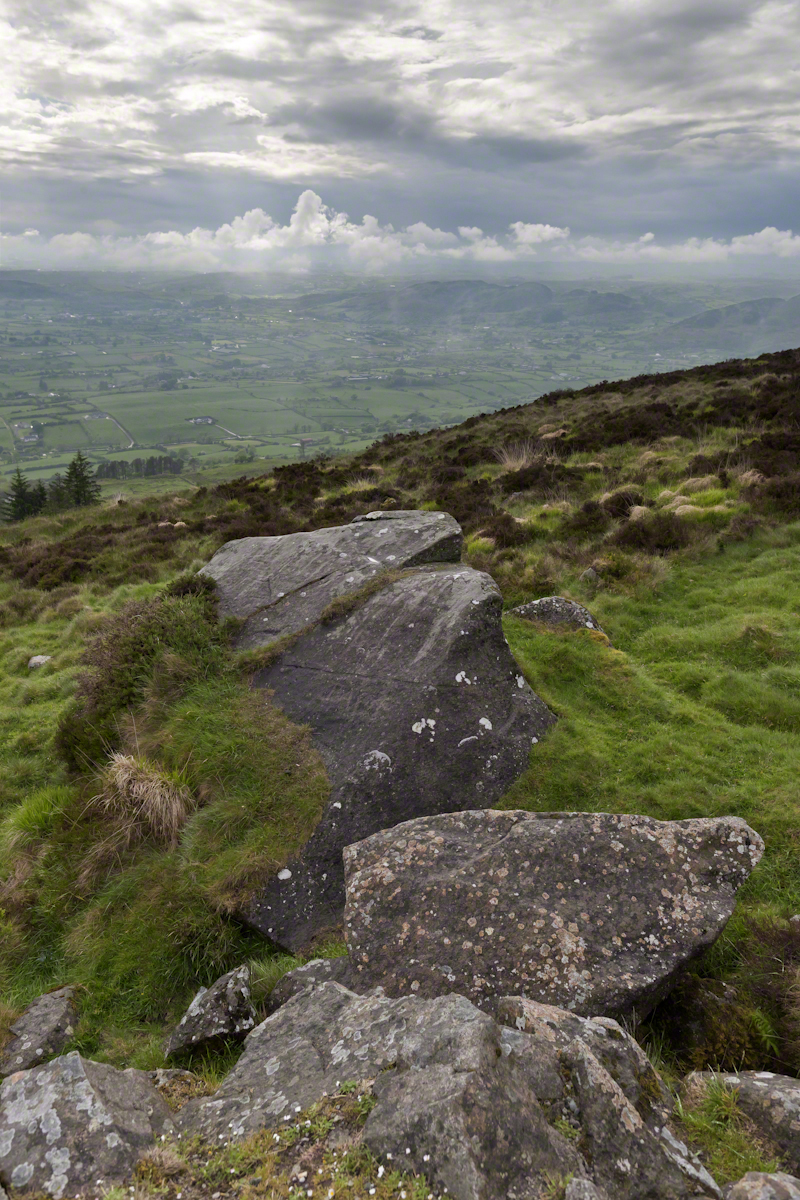