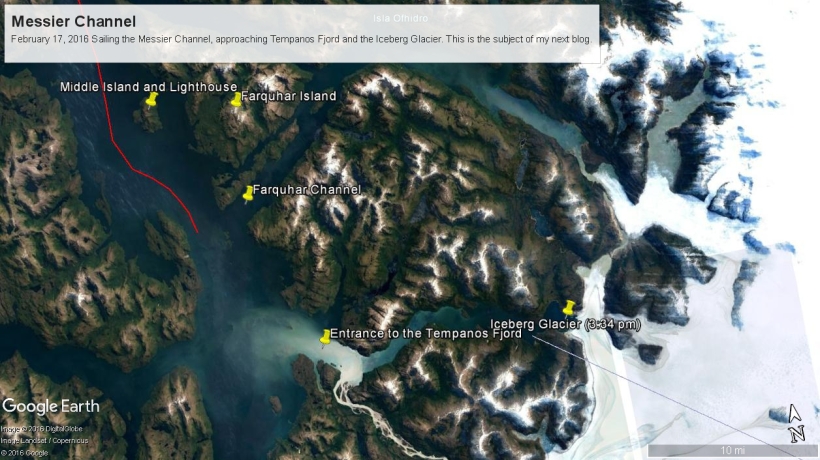 Maps of our visit to Iceberg Glacier beginning from Cape Rapier, the Pacific Ocean

Here are a series of maps to aid your understanding of this series of blogs, starting with sunrise off Cape Rapier and ending with my next blog, the approach to Tempanos Fjord and the Iceberg Glacier.

Finding your way through photographs

These photographs are most notable for the first sighting of the entrance to Fjord Tempanos and our day’s destination the Iceberg Glacier. At Middle Island Messier Channel is over 5 miles wide though studded with islets and navigational hazards.  Here is a Google Earth map of the area with notable locations pinned with names.  The red line is a ruler path from Sombrero Island.

In the previous blog, Orientation, Iceberg Glacier, February 17, 2016, you learned about the route the Oceania Regatta followed that day.  We left off with photographs of Scout and Orlebar islands, the time was 12:43 pm Chilean Summer Time (daylight savings).  The next photograph was time stamped 2:24 pm and, frankly, I had lost track of where we were, so it was necessary to determine the ship’s position.

Here is how to do it.  From two known points, Sombrero Island at the northern end of Messier Channel and the Iceberg Glacier, our day’s destination, first a velocity from the total distance, in miles, (Google Earth) divided by the time duration (subtract time stamp of the starting from the final digital photograph and convert to minutes).  This gives an average ship velocity in miles  Using excel list the photographs with time stamps.  For each photograph calculate the time from the starting photo, in minutes, and multiply this by the average velocity.

In this way, I determined the first photographs of this blog were Middle Island and obtained confirmation using Google Earth to view the location from ground level.  The process is iterative in that the views showed the first calculated position to be behind the position matching the view.

This, I hypothesized, was because the ship velocity decreased on entering Tempanos Fjord.  Noting a time gap between the last photograph of this blog and the next, taken within Tempanos Fjord.  So, using Google Earth to establish the last photograph position, I recalculated velocity using that last position as the last time.  Then, I recalculated the distances of the photographs and the calculated positions came into better agreement with the viewed positions.  After Middle Island the ship slowed significantly in order to enter the fjord.

I still have opened questions because the calculated speed from Sombrero Island to Middle Island is 6 knots higher than the documented top speed of the Regatta.

Like what you see here? Visit my online gallery for more.
Here is a map with positions of key photographs in this series.

The lighthouse of Middle Island is not in view. The channel between the islands is Brazo del Este.

View NorthEast toward the peaks of Farquhar Island Over the shoulder of Middle Island is Riches Bay of the farther island.

View NorthEast toward the peaks of Farquhar Island. Across from us, on Farquhar Island, the George River flow into Connor Cove which opens onto the channel named Brazo del Este. The channel separates the islands.

View north from mid-Messier Channel. Nearest on the right is Middle Island with lighthouse Farquhar Island behind with Palmer and Hens points. In the distance is Van Der Meulen island.

Tempanos Fjord. View Southeast with Estacion Point and Headland to left. Behind the headland is the entrance to Farquhar Fjord, not visible. Tempanos Fjord is framed by land on both sides.

Like what you see here? Visit my online gallery for more.

Where the Andes Stride Into the Pacific

The Gulf of Penas is a sunken bowl of the western side of the southern Andes.  Instead of canyons and valleys, fjords surrounded by craggy peaks are the rule.  Sailing ships, driven by storms of the western Pacific, found ways through the fjords all the way to the straits of Magellan.  This was our route as we entered the Messier Channel, a route discovered in the earliest years of colonial exploration.

Looking back the way we came…..

At the mouth of the channel, Zealous and Sombrero are neighboring, and isolated hills.  Surrounded by water, they are also islands.  Zealous is just under 2,000 feet.  Sombrero, at 200 feet, is prominent only for its position and shape.

Here we are crowded by headlands, points, islands all rising steeply from the water.

Here I have views of these islands with craggy peninsulas in the distance.  The view is to the northeast and east.

mountainous crags over the Pacific Ocean

In English the Gulf of Penas means “Gulf of Distress.”  Open to the storms of the western pacific ocean, ships seeking refuge sail this body of water to reach the shelter of the bays around the entrance of the Messier Channel.

Stargazing Chileans named the channel after Charles Messier (1730 – 1870), author of a catalog of 110 visually diffuse celestial objects such as the Great Cluster of Hercules, the Crab Nebula of Taurus, the Ring Nebula of Lyra.  As Messier catalog objects these are listed on star charts as M13,M1,M57.

The Larenas and Fresia peninsulas of Aisen Province, Chile, on the southeastern shores of the gulf are seen here as we approach the Messier Channel.  The shore is dotted with islets and islands.  The Chilean pilot who came aboard at Puerto Chacobuco is earning his salary, keeping us safe.  To reach the channel we pass through Tarn Bay, generally north to south.  The southern margin of the bay is marked by Sombrero Island, the subject of my next blog.

Get More from My Online Gallery

There is a steady wind of about 12 mph driving a few white caps.  A line of surf is seen breaking against the cliffs.  Shot midmorning from our stateroom terrace as the Regatta cruises south, February 17, 2016.  We are headed to an encounter with the Iceberg Glacier of the Southern Ice Fields of Patagonia.

Photography conditions were poor: shooting into the sun from an unstable platform gives poor contrast for the mountain crags.  The stabilization of the Canon lens was helpful and I balanced the need for a short exposure with the lowest ISO possible.  No time to experiment.