Less than 3 seconds elapse from the Osprey initiating dive to emergence from the surf and flight, fish in talons.

A sequence of high speed shots of what the Osprey does best. For this, the sixth and final post of this series (Click me for the first post, “Endless Searching“), we follow the bird in a dramatic plummet into the surf until it rises, catch in claws.

Click Me for “Florida” in my Fine Art Galleries.

“All Elements In Place”

Late morning of January 20, 2019 I headed out with the Canon EOS-1Ds Mark III mounted with the Canon EF 70-300mm f/4-5.6L USM lens for handheld shots. Many elements aligned for these shots: weather, equipment, placement among them. The angle of the sun at 11:21 am was not optimal, but the cloud cover made up for it.

The dive impact happens in less than 2 seconds.

Less than one second from point of impact until emgergence and flight.

Humans are hard coded to relish scenes of water and land.

Now and then a photograph comes along that stands by itself. For this, the fifth post of this series (Click me for the first post, “Endless Searching“), we explore images that speak for themselves.

Click Me for “Florida” in my Fine Art Galleries.

“Another Day in Paradise”

Humans are hard coded to relish scenes of water and land. This day I headed out with the Canon EOS-1Ds Mark III mounted with the Canon EF 70-300mm f/4-5.6L USM lens for handheld shots. 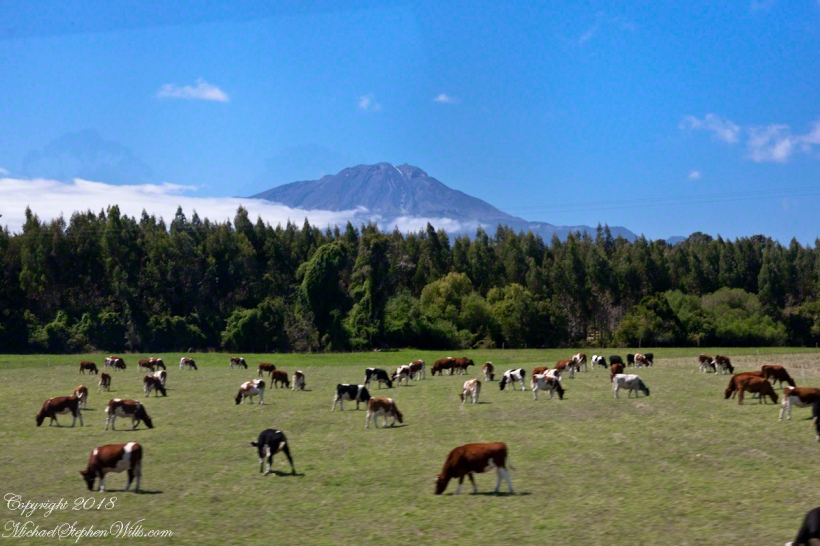 A user commented on a Chile Lake District post of mine asking for more photos of Germany. This is striking, because German traveler who visited have made note of parallels between this area and Europe. In this series I will share photography taken from the tour bus window as we traveled to the Lake District and returned to Puerto Montt. I used a handheld Canon EOS 1Ds Mark III SLR with the Canon lens EF 70-300 f 4-5.6LIS. This is the second post of this series.

Wood is a building material the German pioneers had in abundance. They went to work clearing the forests, tilling the land and building structures such as this, a house in the town of Puento Varas on Lake Llanquihue. In face, those windows face the lake. I have our guide to thank for these photographs of the houses, early on as we drove through Puerto Montt she shared the significance of the shingles with us.

The shape is identical to that used in Germany and Switzerland wooden frame homes. It was the wood of a tree native to Chile and western Argentina that made these possible and in the course of surviving in a new land, a good portion of their natural patrimony was spent. Since the late 1960’s Chile has backed away from this and conservation of the slow growing Alerce is now paramount.

We can intuit how difficult the winters are from the view into this house provided by the window. There is a room outside the living area, sealed by a second door to prevent the escape of warmth. The use of metal embedded into the low concrete wall is common in the South American countries we visited.

Close by, also facing the lake in Puerto Varas, is this police station, the “Civil Police,” whatever than means. It is a small, apparently historic, building. Rising around it are modern hotels.

This large rural shed, on the outskirts of the town, appears to be a structure from the original 19th century settlers, a testimony to the durability of Alerce shingles covering the siding and the large, steeply sloped roof.

Suddenly we were graced with these cleared farm fields, here and there large modern homes high on the hill for a sweeping view of the lake.

In the distance is Calbuco, the volcano whose eruption broke the peace ten months before our trip. The wind spared these lands the destructive effect of falling ash. 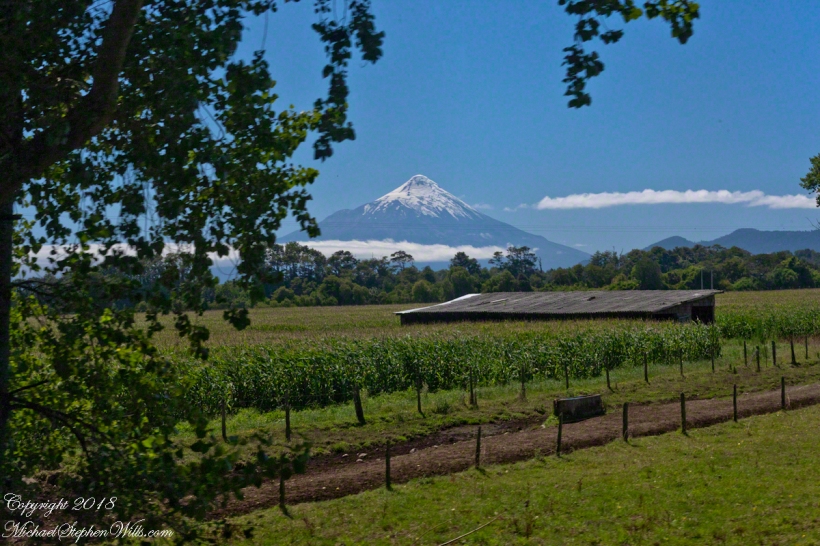 A user commented on a Chile Lake District post of mine asking for more photos of Germany. This is striking, because German traveler who visited have made note of parallels between this area and Europe. In this series I will share photography taken from the tour bus window as we traveled to the Lake District and returned to Puerto Montt. I used a handheld Canon EOS 1Ds Mark III SLR with the Canon lens EF 70-300 f 4-5.6LIS. This is the third post of this series.

Happy Thanksgiving to all you Road Warriors

Throughout my life, beginning with trips between Long Island and Tucson, Arizona for college…throughout young and mature adulthood to return to the family home for celebrations…in my 40’s, 50’s and 60’s caring for aging parents and now, in retirement, researching genealogy I have travelled this route over the George Washington Bridge, over Manhattan, through the Bronx, then over the Throgs Neck Bridge to Queens County, Long Island and always as the driver. This is the first time being able to document the route with a quality camera. Driving here requires the total attention of the driver, the traffic, reading unfamiliar signs…..what a treat to sit and snap. Here goes.

On Interstate 80 then 95 moving through Bergen County and Fort Lee, New Jersey.

Into the Bronx via the imfamous Cross Bronx Expressway…..trucks from across the continent funnel through here.

Thank You for exploring the South Rim trail of Taughannock Falls State Park on the last perfectly sunny autumn day of 2019.

A Rock Elm, late to turn in autumn, stands among a hemlock grove on the South Rim Trail of Taughannock Falls Park, Finger Lakes Region of New York State.

I captured these during a trip through the Bronx, returning on a perfect fall afternoon from our outing to find Grandfather Wills’ resting place: Bronx River Parkway, Moushulu Parkway, Henry Hudson Parkway then over the George Washington Bridge to New Jersey. The trees were in their glory.

I had a session using a tripod for longer exposure shots and neglected to revise the camera settings for shooting on the run from an auto…so the photographs are not as sharp as they could be.

New Jersey from the Transcontinental Interstate Route 80 connecting New York City to San Francisco and all point in between.

When I was a young adult Mom told me Grandfather Wills was buried in the Bronx. James Edward Wills died when my father was very young and they were poor, living in tenements on the upper West Side of Manhattan April 1916.. Looking through Dad’s papers after both he and Mom were gone, I found the grave receipt: “Saint Raymond’s Cemetery, Westchester, New York.” James Wills, born April 1877, the youngest of six children of George Wills and Margaret McCambridge, who were 43 and 38, their place of residence two years later cited in the 1880 Federal Census as Shamong, New Jersey. Today, Shamong Township is part of New Jersey Pinelands National Reserve. Atsion, the Iron Furnace town where James’ Grandmother Ann McCambridge (nee Milley) worked as a cook, is in Shamong Township.

Finding and researching the grave receipt is what began my adventures in genealogy. What was, in 1916, Westchester is now the Schuylerville section of Bronx county, a borough of New York City. Saint Raymond’s Parish, still going strong, acquired more consecrated land for burials with now an “Old” and “New” cemetery separated by the confluence of interstates 95, 295, 678 including the approaches to the Whitestone and Throgs Neck Bridges, the superstructures of which are visible from the “Old” cemetery.

Having sorted out these details, I approach my cousin Mary at the October 2021 engagement party of my niece where we made arrangements to find Grandfather Wills’ final resting place the following month. On Wednesday, November 10th, Mary’s husband Peter drove us over the George Washington Bridge, through the incredible traffic of the Cross Bronx Expressway (a funny name for this moving parking lot, bumper to bumper trucks), to Schuylerville. We navigated to the “Google Maps” push pin I placed next to Section 7. Google Maps even has street views of the cemetery, in retrospect the view of Section 7, Ranges 35 – 51, includes grandfather’s grave.

We worked together, walking the rows, reading headstone inscriptions, on the expectation of finding Grandfather’s name without success. Peter and I took to counting the rows to find number 41, with success. With less success counting the headstones and spaces (unmarked graves) to find number 82. At the same time, Pam and Mary searched. I used the “Find A Grave” website to look up headstones in section 7, row 41 and found the only location provided was “Section 7.” I also called the cemetery office where they were most helpful. There is NO record of James Wills.

Then, Pam noticed some headstones inscribed with the exact location, Section, Range (Row) and Grave.  This was the key.  Here are the headstone references that pinpointed Grandfather Wills’ final, unmarked, resting place.

In the following photograph I am on the right with wife Pam. Cousin Mary next to her husband Peter on the right, Mary is standing on grave 82. 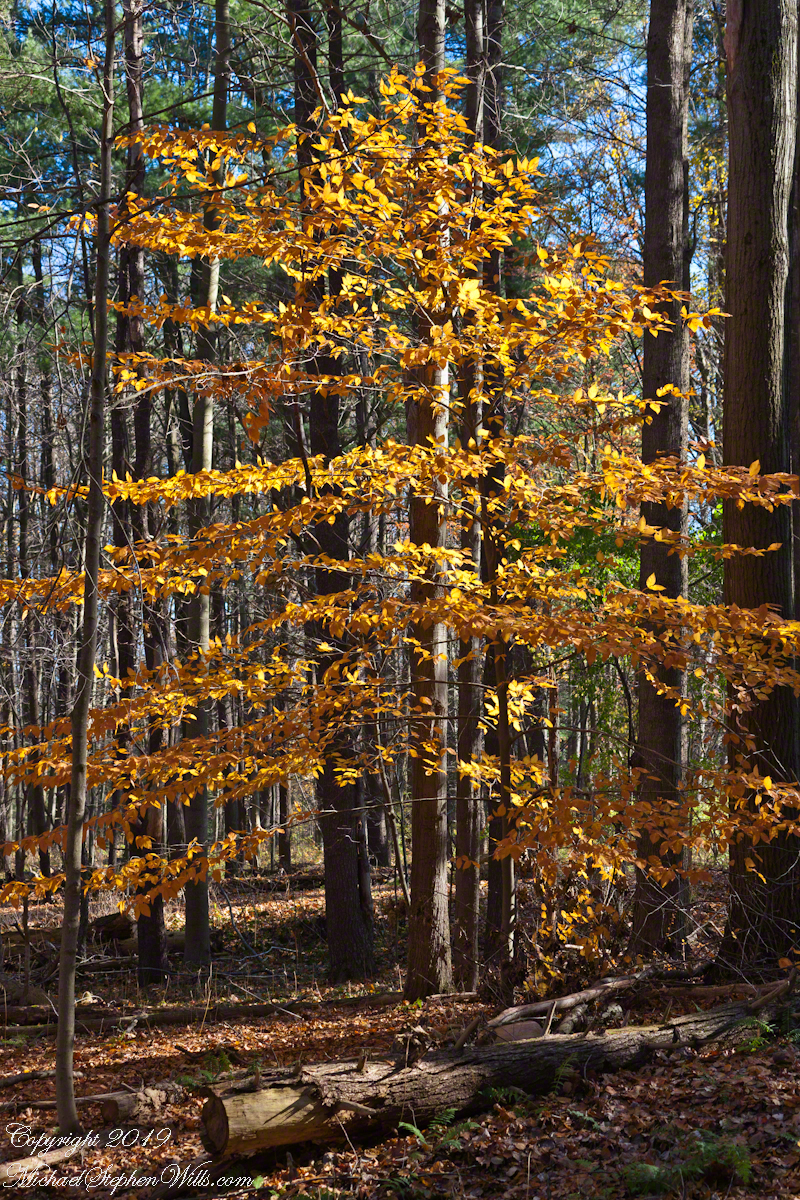 Taughannock Gorge south rim trail passes close to Gorge Road at one point. Rock Elm is an understory tree that comes into its own late autumn.