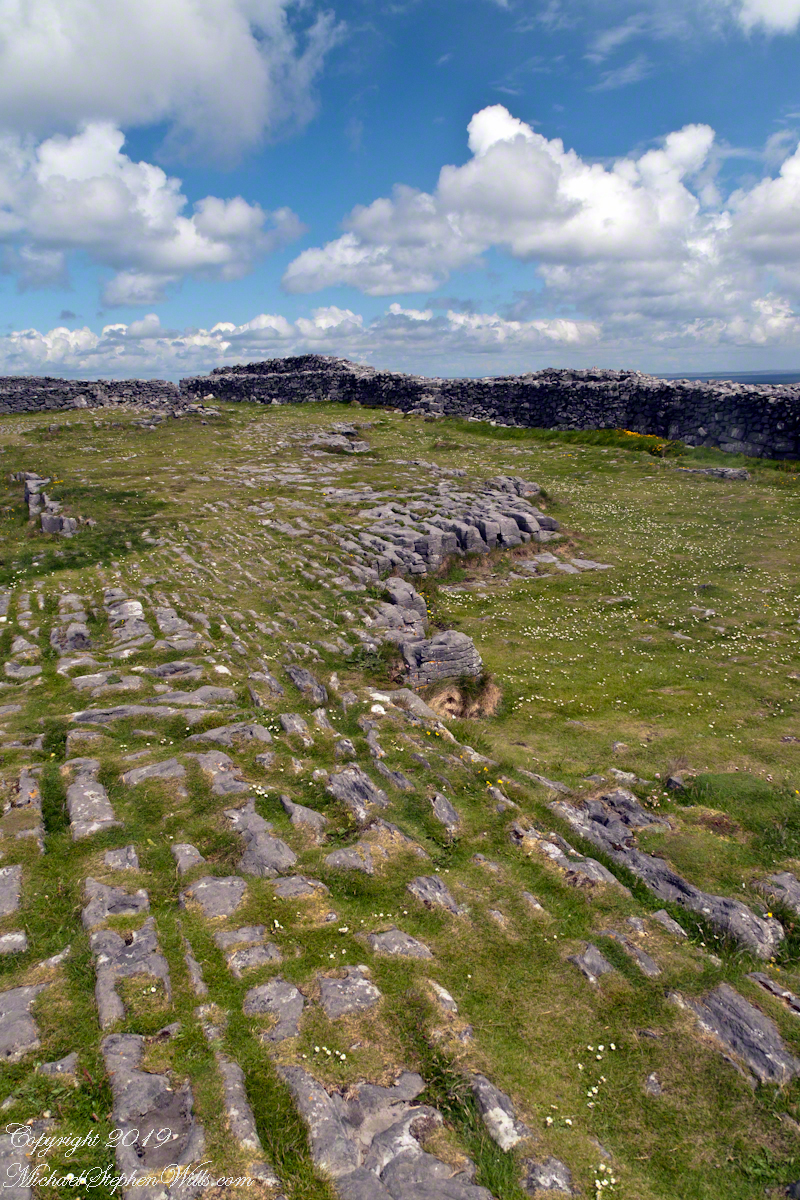 Site of earliest construction, 1,100 BC

A view to the northwest from within Dun Aonghasa in springtime. The interior a karst formation (see my post, ” Galway Bay View from Dún Aonghasa”), the grikes filled with grass and a sprinkling of white and yellow flowers, a cloudscape rising over the walls. Inishmore, Aran Islands, County Galway, Ireland. 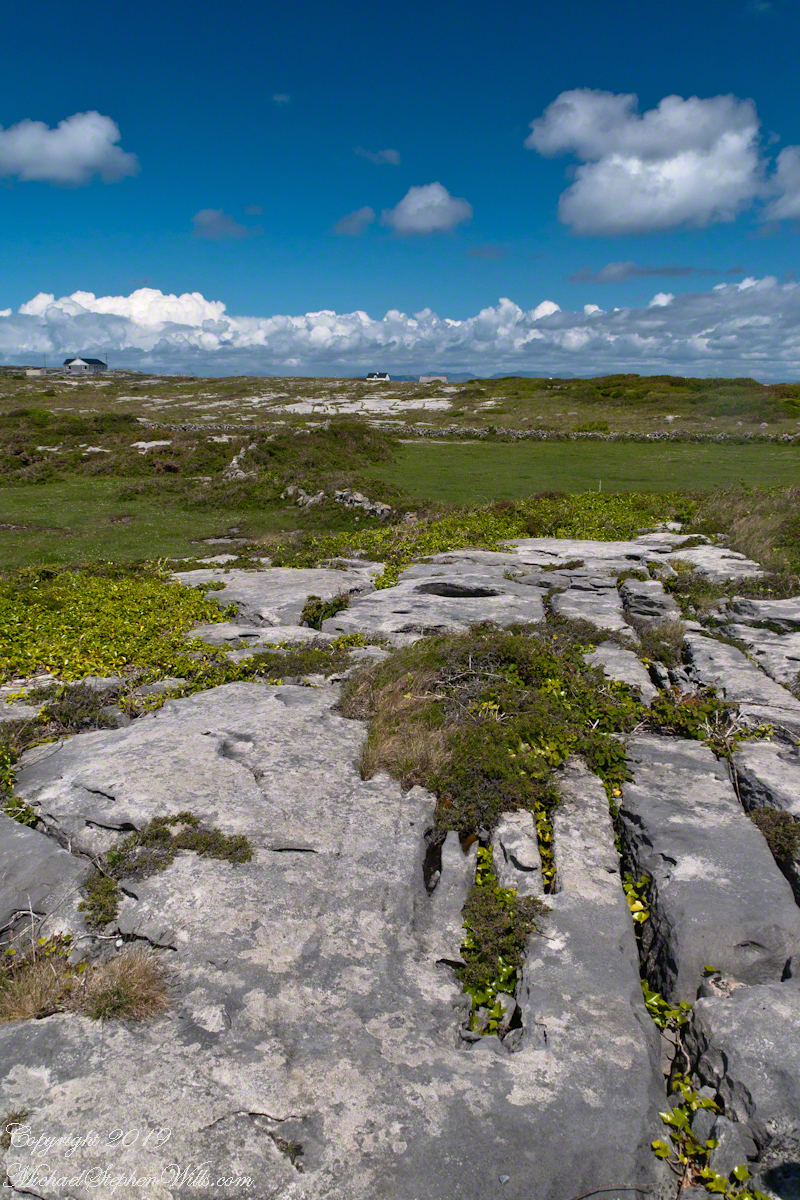 where the wildflowers grow

The exposed limestone of the Aran Islands here transitions to a fertile field of grass, husbanded by generations of islanders. Photograph was taken from the path on Inishmore leading up to Dun Aonghasa.

The Aran Islands are an extension of The Burren of Ireland’s Counties Claire and Galway.  The word burren is from the Irish Boireann, meaning “great rock.”  The glaciers that covered Ireland, retreating about 10,000 years ago, scraped down to the bedrock, exposing wide areas of limestone and dropping, here and there, large rocks.  When people came along the foreign nature of the large rocks was recognized, all the more obvious for lying on the horizontally bedded, exposed limestone.  We call the foreign rocks erratics.  The underlying scoured rock is a pavement for a resemblance to a cobbled roadway.

The incised line, filled with grass and wildflowers, in the following photograph is called a gryke.  The body of stone between the grykes are clints.  Sometimes, the grykes are cross hatched and the clints resemble cobblestones or flat paving stones.

The view is northeast toward the 12 Bens of Connemara. Inishmore, Aran Islands, County Galway, Ireland 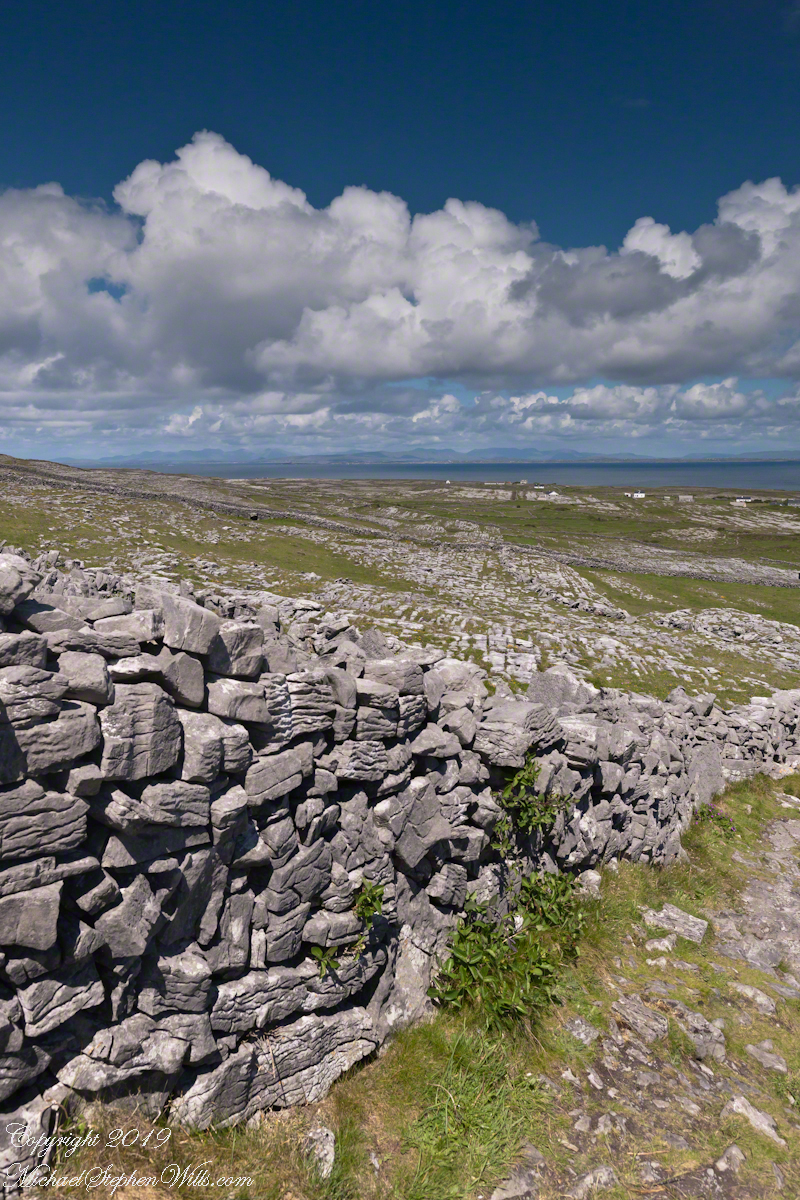 a season of wildflowers across a karsk landscape 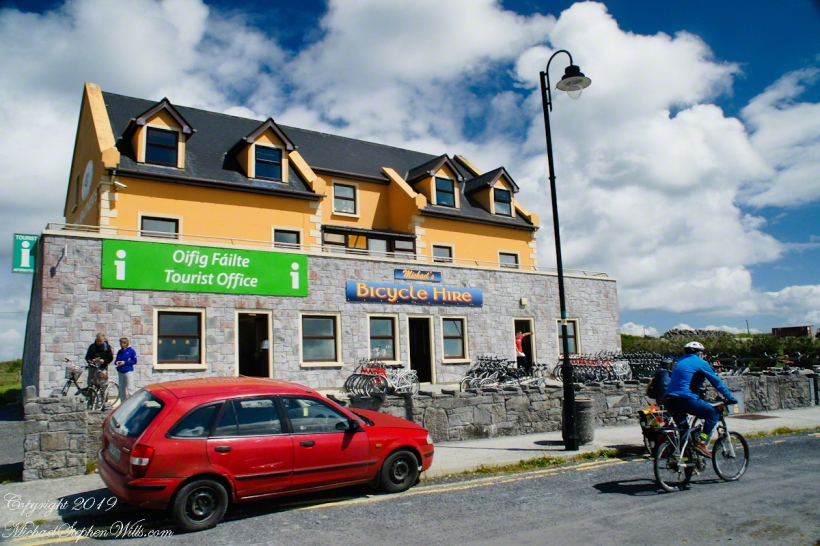 The bicycle rental place got the short end…unfortunately.

Admittedly, I over-planned the Ireland trip.  For every day possible the venues were pre-booked and paid.  In theory planning provides more flexibility when life interrupts.

For the Inishmore planning, a perfect day, for me, was tooling around on a bicycle stopping where we pleased with welcome exercise in between.  That was unrealistic, the day worked out otherwise.

Upon disembarking from Queen of Aran, our ferry out of Doolin, onto the Kilronan quay we walked toward the bicycle rental and Pam refused to bicycle. Her objections were many, safety, impending rain, time. She did have a point about time, the ferry leaves at a set time leaving errant tourists to fend for themselves. We were unused to cycling, still Dun Aonghasa is just over 5 miles from Kilronan, less than an hour round trip. With our starting time of 11:30 am there was 3.5 hours slack for returning to the quay before the 4 pm departure. Plenty of time for wandering the ruins and stopping along the way.

We followed Pam’s advice. Still there were the many bicyclists. Perched on our horse drawn carriage, on the uphill runs, each bicyclist we passed was proof positive to Pam of the wisdom of our choice. I was silently envious of their freedom and overlooked the many mini-buses on the narrow road.

When the day comes to mind, not often, I am left with the guilty feeling of not stopping into the bicycle rental office to cancel the reservation. An email was waiting for me the next day, asking where we were. Thus, the title of this post, “Stiffed.”

Pam’s reasons for not wanting to ride a bicycle around Inishmore:
“I hadn’t been on a bike for approximately 20 years.  However, if it wasn’t going to rain (it did), if the narrow road was larger, if there weren’t any minibuses loaded to the gills or horse traps sharing the same single lane, I would have considered it.  Sitting back and enjoying the beautiful view on our private horse trap and listening to our very knowledgeable tour guide/driver was the highlight of this adventure for me. I am sorry you felt like you didn’t have a choice.”

Pam’s correction of my statement about her being concerned about time:
“Time wasn’t a factor in my decision making.  I also didn’t have a problem with you biking but there was no way I was going to do that.” 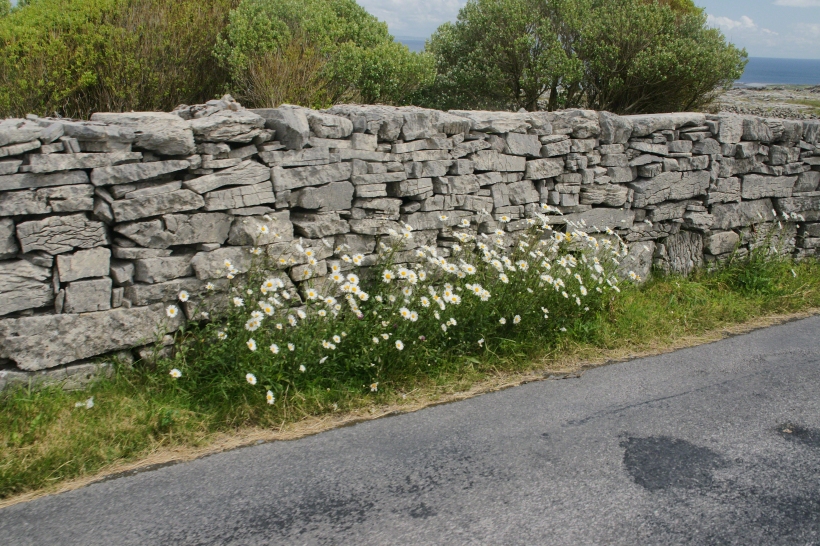 Daisies are a plus

Enjoying travel on a horse trap, a type of carriage, on Inishmore , the largest Aran Island in Galway bay, we headed up Cottage Road from Kilronan, the main island settlement. It was from Kilronan we disembarked from the ferry, hired the driver and trap. Our destination an Iron Age fort, Dun Aengus, and sights along the way.

Dry Stone walls abound throughout Ireland.  Ancient walls, buried in peat, were discovered in County Mayo and dated to 3,800 BC.  This is a field wall on Cottage Road with daisies growing at the wall base.

The wall is composed of stones, not rocks. I have read in places a stone is a rock put to use or shaped by human hands. Other usages have rock and stone used interchangeably. For example, an internet search on “Dry Rock Wall” will return hits on the same. “You pays your money and takes your choice.”

Sources for this post: search Wikipedia for “Dry Stone”. 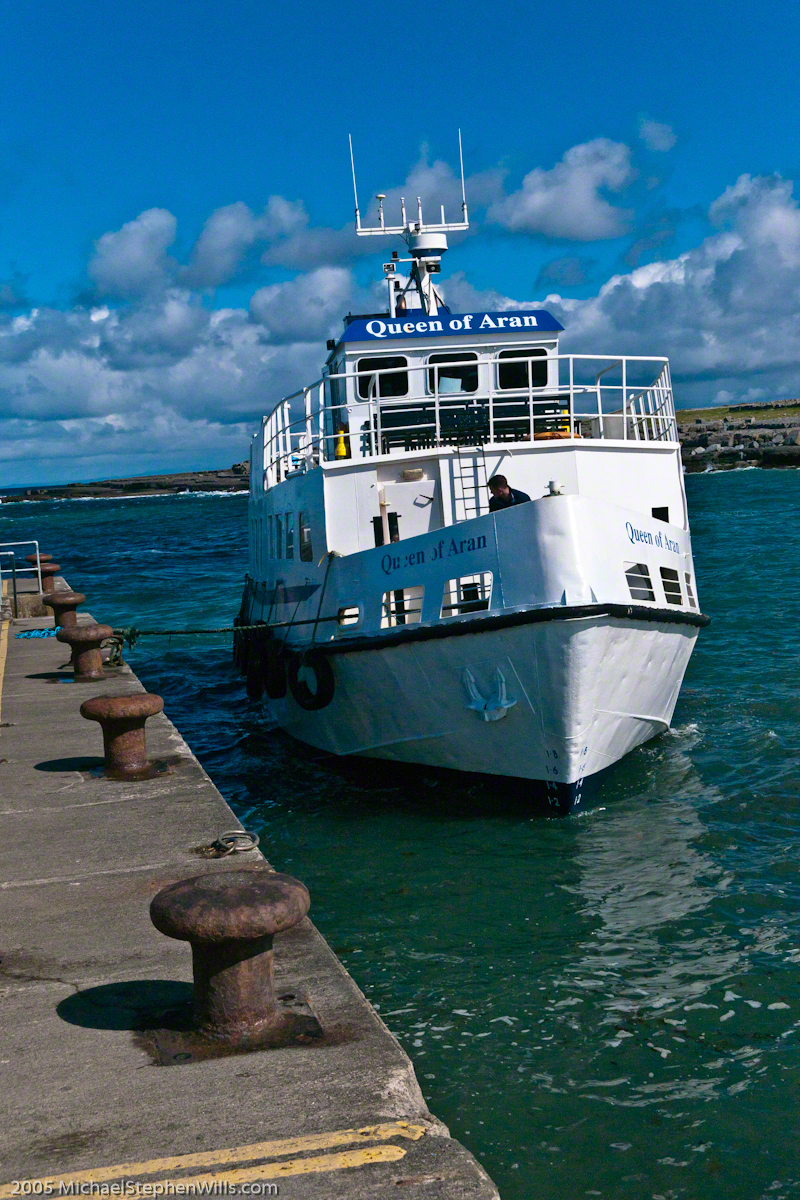 The approach to Killeany Bay of the Aran Island Inishmore is very dangerous, guarded by a Lighthouse on Straw Island to the South and the Killeany buoy to the North.

This view is to the north, northwest from a ferry en route to Inishmaan through Galway Bay.  In the distance is the Connemara and the 12 Bens (12 Pins) mountains. Aran Islands, County Galway, Ireland.

There of stories of this buoy coming unmoored.  October 27th 2012 it went adrift.  An Aran fisherman, Micheál Seóighe (Ml Joyce) and his boat Naomh Beanán tracked  it down, hauled it back to the harbor.  The buoy was back in service shortly after.

Here is a photograph of me with the camera used.  It is a Canon EOS 1Ds Mark III with a Canon lens 200 mm f2.8/L.  I am standing on the deck of the Queen of Aran ferry out of Doolin next to the Cliffs of Mohr. 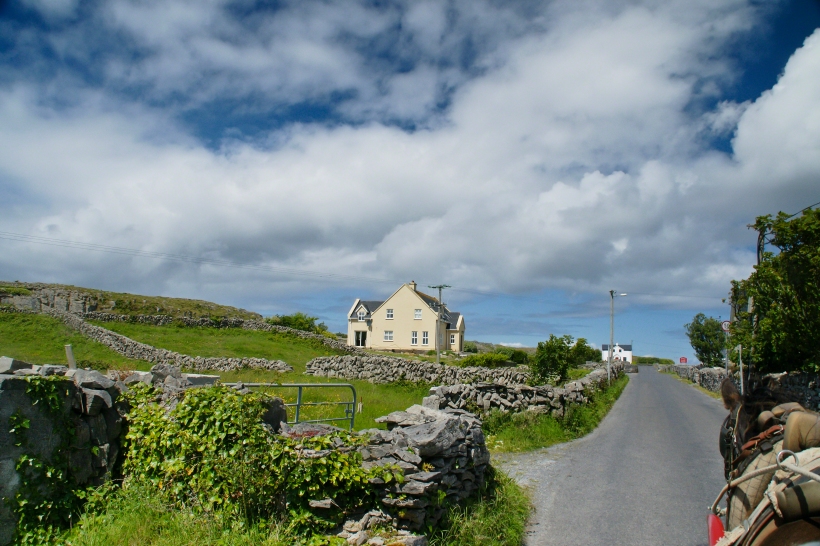 View from a horse trap on the Aran Islands, Galway Bay, Ireland

Enjoying travel on a horse trap, a type of carriage, on Inishmore (Inis Mór), the largest Aran Island in Galway Bay we headed up Cottage Road from Kilronan, the main island settlement.  It was there we embarked from the ferry, hired the driver, his horse drawn trap.  Our destination an iron age fort, Dun Aengus (Dún Aonghasa, the Irish language name) and the sights along the way.

Headed up Cottage Road, I captured this view of dry stone walls and homes against the May sky over the shoulder of our horse. 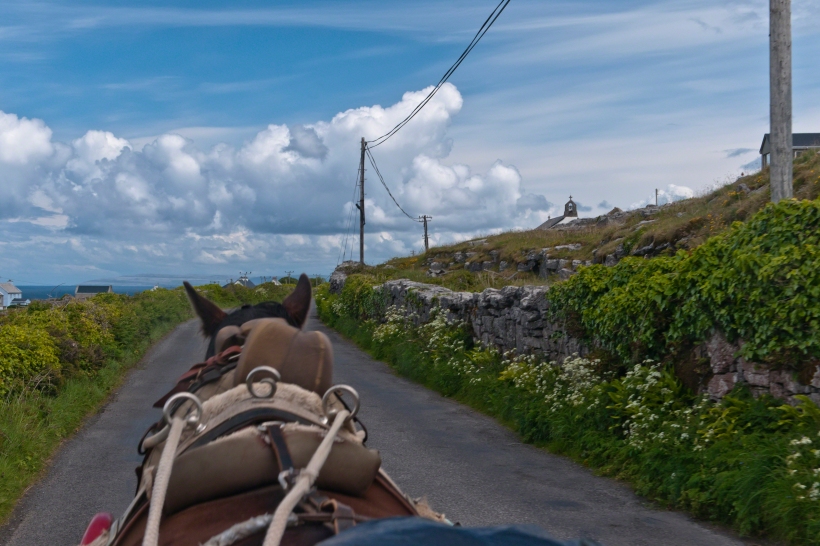 Travel at its best

Enjoying travel on a horse trap, a type of carriage, on Inishmore (Inis Mór), the largest Aran Island in Galway Bay. 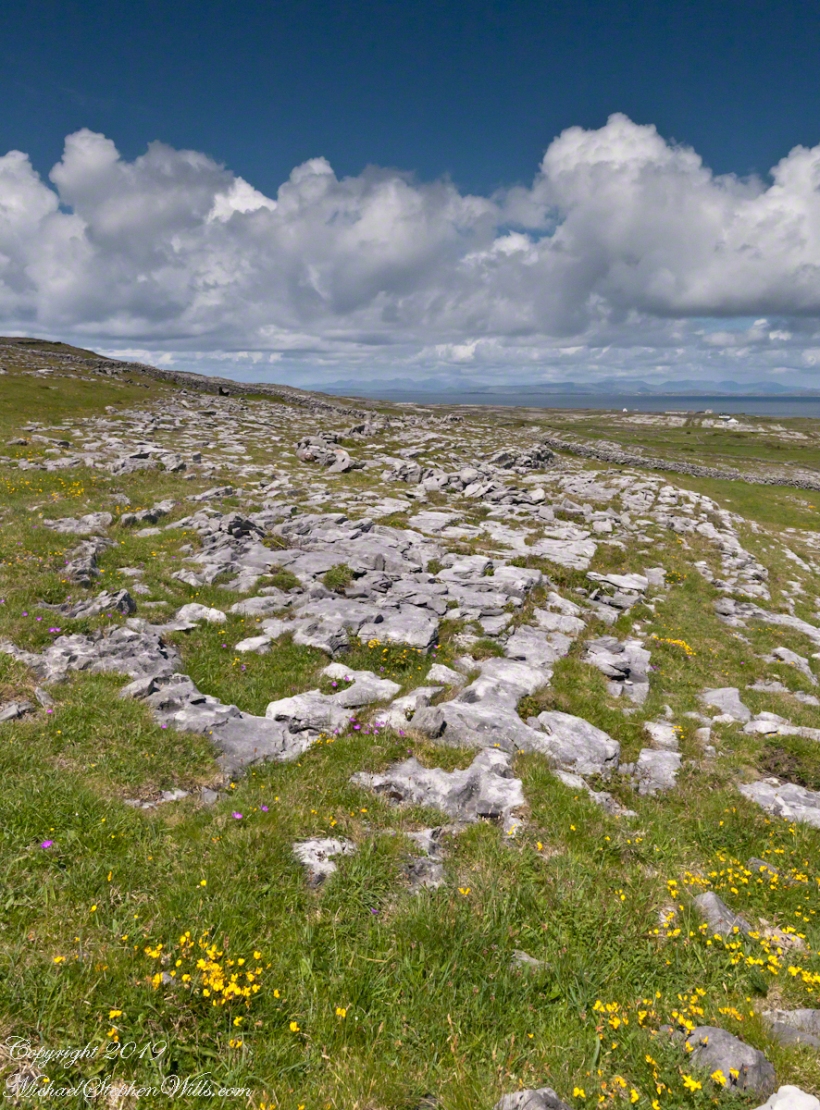 a season of wildflowers across a karsk landscape

Another aspect of the gradual 1/2 mile inclined path to the central ring of the prehistoric Dun Aonghasa ruins of County Galway, Ireland.

Note the doorway (with long lintel) in the surrounding wall, to left of center in middle distance. 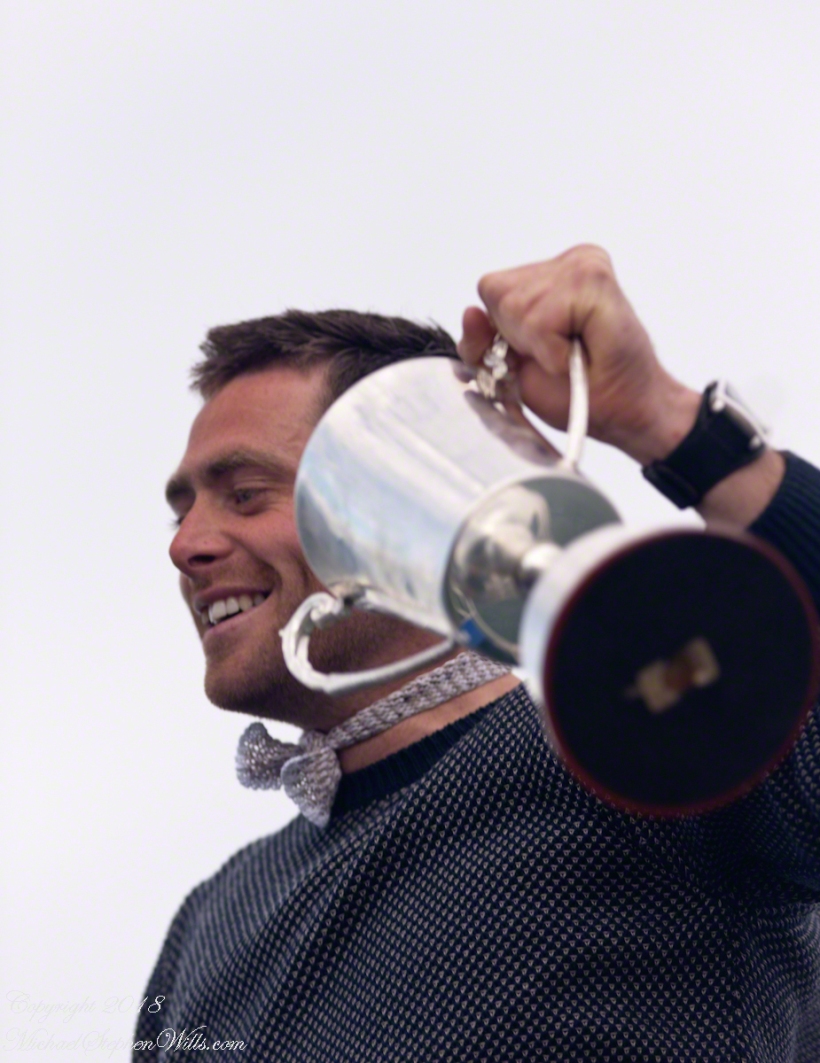 After we passed the Killeany bouy on our ferry trip, on the Queen of Aran, (click the link to see this posting) from the harbor of Inis Mor to Doolin, the ship made four, yes four, dockings.

A few days prior the Gaeltacht held the annual Irish football championship the weekend of May 21 through June 1 in Moycullen, County Galway. It was the Three Aran Islands (Oileaín Árann) team who won the 2014 championship. Sunday, June 1, the weekend of their victory, the cup was presented to Inis Mór, the largest Aran island and the one furthest into Galway Bay.

The team on Monday, June 2, the day of our trip, was on Inis Meáin, in celebration mode.  Some of them were waiting for the ferry when we pulled into the Inis Meáin, the second largest Aran island between the other two, dock.

The first of the previous three photographs is of the waiting team members who boarded and we left for Inisheer Island, the smallest of the three and the closest to Galway City.  The Queen of Aran was well out of the harbor when I imagine the radio in the pilot house said, “Come back, there are more team members on the dock.”  So we turned around, docked and several more came on board.

In way once again, well away from the harbor, the ferry turned around for a second time for a third landing at the  Inis Meáin dock.  With the full compliment of champions on board the ferry turned out of the harbor a third and final time for the last leg of with Silver Cup’s tour of the islands.

The population of Inisheer is about 250 souls.  It seemed all were waiting to greet the team.

A large bon fire blazed as the Queen of Aran approached.

People lined the dock from beginning to end.

Calling out, waving their arms.

Standing and smiling.  Here is a flock of fans, from Galway apparently, very pleased at the sight.

The team was on the upper ferry deck.  I turned around and was lucky enough to capture the team captain (Not sure, but who else would it be?) holding the silver cup for all to admire.  Theirs for a year.

The crowd welcomed their own back home.

Surrounded the team and walked them grandly to town.